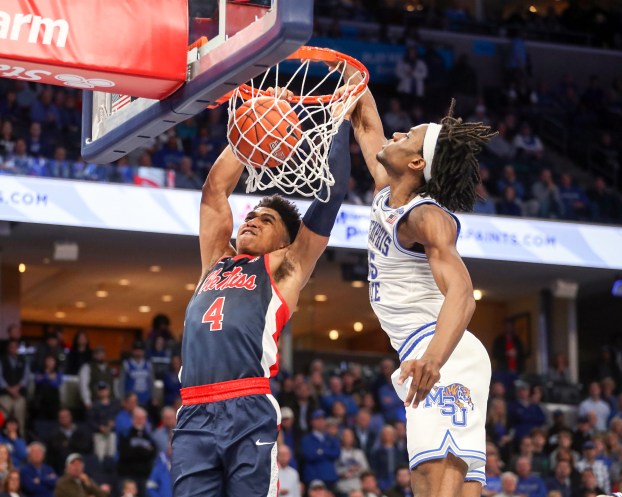 MEMPHIS, Tenn. – Ole Miss struggled down the stretch a season ago in big games.

Losing to Memphis on Saturday was another in a string of tight losses to ranked teams, but Thanksgiving week in New York gives the Rebels yet another opportunity for Kermit Davis’ team to prove themselves on the national stage.

Ole Miss beat some really good teams last year, including wins on the road against ranked Mississippi State and Auburn. Yet down the stretch, they struggled on the big stage, dropping tight games at home to No. 7 Tennessee and No. 6 Kentucky before losing in the first round of both the SEC and NCAA Tournaments.

Saturday’s one-point loss to No. 16 Memphis on the road is a new season, yes, but it’s another in the stretch of losses on the national stage. There are building blocks and reasons to be optimistic.

“This was an SEC road game. That’s what it was right here,” Davis said Saturday after the Memphis game. “Good players, good coach and a tough crowd. That’s what we face every night. And this is the part of the season that’s great for us. We’re going to find out a lot about our team.”

The good news is that Memphis only started what will be a tough but fun stretch for the Rebels. They play two nationally televised games this week over Thanksgiving. Playing in the NIT Tip-Off tournament at the Barclays Center in Brooklyn, the Rebels will take on Penn State and either Oklahoma State or Syracuse in the tournament.

For Davis and the Rebels, early season games against smaller teams at home are important to build a résumé. These tougher games before SEC play starts is when they’re truly going to find out about what kind of team they have.

“We have a lot of new guys,” Davis said. “We play a lot of freshmen and a couple of new junior college guys. It’s their first time in these kinds of atmospheres. You just hope they use these and get better and we’ll roll from that into a really good Penn State team.”

The stretch doesn’t lighten up following the return from New York. Ole Miss still has to play Butler at home and has a road trip to Wichita State on the slate, all before SEC play tips off on Jan. 7.

Memphis didn’t go as planned, but it was a learning opportunity. To be able to fight from 16 down in the second half against a ranked team on the road is a really impressive feat. This week, they have two real opportunities in front of national audiences to prove that comeback was more of a reality than a fluke.

MEMPHIS, Tenn. – Saturday afternoon in the FedExForum felt like a February in the Pavillion, complete with the energy of... read more