2018 Egg Bowl brawl in the rearview, Rebels using extra time to get healthy 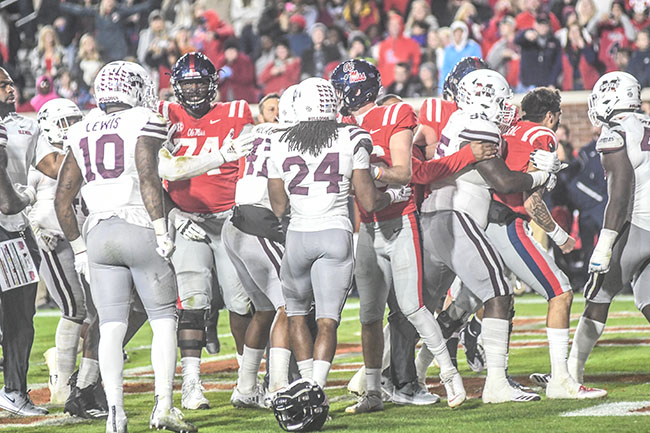 Ole Miss quarterback Matt Corral (2) is grabbed by Mississippi State Bulldogs defensive tackle Braxton Hoyett (95) as a fight broke out at the end of the third quarter at Vaught-Hemingway Stadium in Oxford, Miss. on Thursday, November 22, 2018. (Bruce Newman, Oxford Eagle via AP)

Simply put, whatever happened in 2018 has no impact on anything that will happen in the 2019 Egg Bowl – enough so that the Rebel coaching staff isn’t even addressing the prior season.

Toward the end of the third quarter a year ago, Matt Corral found himself in a precarious situation. Sticking up for his guys, Corral found himself engaged with Mississippi State defenders Johnathan Abram and Jamal Peters. Peters would eventually get into Corral’s facemask and rip the freshman quarterback’s helmet off. Four players would be ejected.

“You never want a fight or a penalty, it doesn’t matter how heated the rivalry is,” head coach Matt Luke said after last year’s Egg Bowl. “You just want to go out there and play and play between the whistles.”

Coming into the game in 2019, with many of the same players that were involved or witnessed the altercation at the end of the last year still with both teams, the message from the Rebels side is simple. That altercation is in the past.

They’re not talking about it. They assume the current Rebels know how to handle themselves and won’t draw on any ill will remaining from a year ago.

This year features a little different spin to the game from the Ole Miss side. The Rebels have their second bye week of the season leading into the all-important Egg Bowl.

Sure, extra time to install a game plan for the Bulldogs is critical, but more so is having extra time to recover and get healthy. During the bye week practices, Ole Miss held three key starters – Ben Brown, Scottie Phillips and Benito Jones – from practices. All three were dealing with minor injuries and are now practicing again. They’re all expected to play.

Phillips and Jones in particular, as seniors, have a little extra motivation to get themselves ready to play in their final game as Rebels. There’s no need for this staff to emphasize the importance of this game. Sure, there’s the outside chance of bowl eligibility on the line, but it’s also the Egg Bowl, a game Ole Miss has actually won the last two meetings in Starkville.