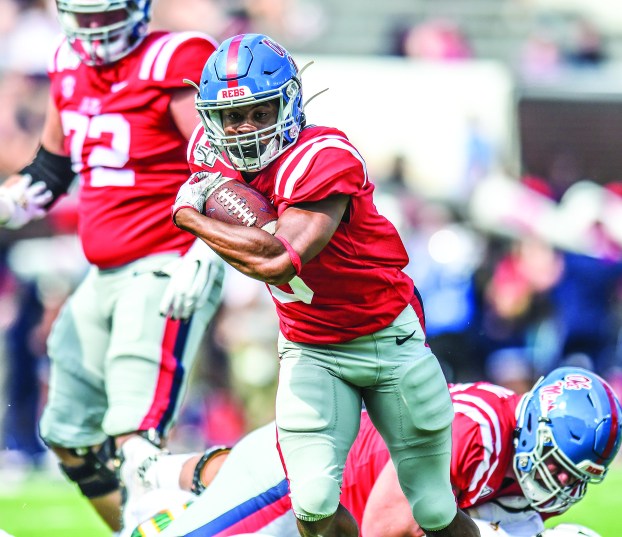 Jerrion Ealy has seen the Egg Bowl, now is his chance to get in the action

Anyone following Ole Miss football during the 2019 season is aware of the youth of the team, but what some may not know is how this youth has been so well ingrained in the Egg Bowl rivalry.

Ole Miss has 21 true freshmen on roster from the state of Mississippi, including their starting quarterback and leading rusher from the running back slot. That rusher, Jerrion Ealy, has grown up around that rivalry as long as he can remember.

“Growing up and seeing this rivalry, it was just different,” Ealy said. “You never knew who was going to win. The team you always expected to win never won. It’s just been ‘Okay, who’s going to win this year?’ That’s what makes it a fun game to watch.”

Ealy, who grew up in Walnut Grove and attended high school at Jackson Prep, has been around the game from a young age. He jokes that his mother has been up to Oxford just three or four times total, but that his family grew up going to the game over Thanksgiving.

Ealy joked that he could play the game the prior Wednesday or Thursday or Thanksgiving Day itself – It won’t change his or his teams’ readiness. Regardless, he said he knows it’s going to be a game with a whole different level of intensity.

Just a freshman in the SEC, Ealy has played in some of the bigger games any player can play in college football – going on the road to Tuscaloosa and to Auburn – yet even he acknowledges this one is just kind of different.

Since seeing the field for minimal snaps to open the season against Memphis, Ealy has seen his role grow and grow. Entering the Egg Bowl, his 7.71 yards per carry in conference play trails just Clemson’s Travis Etienne for second in the nation.

Ealy is quick to credit his offensive line, a fair point as a unit that was much maligned to start the year has done a tremendous job staying healthy and growing as the season has progressed. It also helps that John Rhys Plumlee, another Mississippi native, is drawing so much attention, only opening up running lanes for Ealy.

Regardless, these freshmen, many of whom grew up very connected to this rivalry, will play a very critical role in the Ole Miss success or failure come Thursday.

2018 Egg Bowl brawl in the rearview, Rebels using extra time to get healthy

Simply put, whatever happened in 2018 has no impact on anything that will happen in the 2019 Egg Bowl –... read more