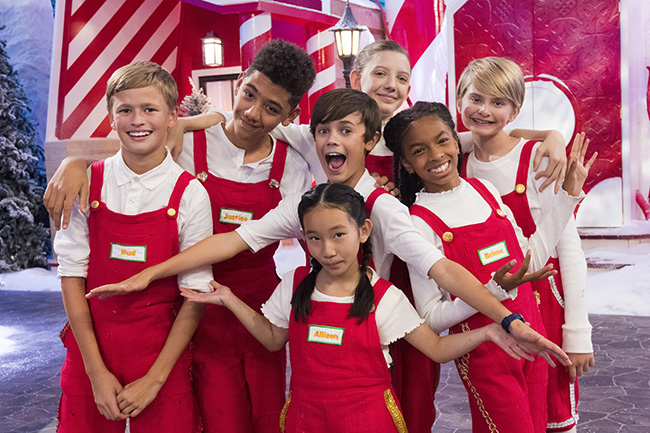 Hud Clark, far left, and six other "elf-testants" will compete to be named Santa's "Top Elf' in a new five-episode holiday show. The show will air on Nickelodeon beginning Friday. (Credt: Nickelodeon)

An Oxford youngster could earn the highest distinction a child can get this time of year.

Hud Clark is one of seven children who will be vying for the title of “Top Elf,” during a new Christmas competition show by the same name airing on Nickelodeon starting this Friday.

Clark was selected to compete on the show after submitting information to a casting agency through an email his mother received from a co-worker. After an interview process, Clark made the cut.

The show is set up in five hour-long episodes where the seven “elf-testants” are paired with one of Santa’s elves as they compete in a series of holiday-themed challenges, from designing their own life-size gingerbread clubhouses to reimagining Santa’s sleigh. The children will also be tasked with building new toys.

“(Santa) asked for a whole bunch of crazy things that we all had to build,” Clark said. “So, it’s a creative, fun challenge show. It was just an amazing experience in general, because I got to create and show off my talent.”

Creating things is nothing new to Clark. On a normal day, he is known to be drawing things or even working on Hot Wheels tracks for his friends.

“I create all sorts of stuff,” Clark said. “I’ve done a lot of really cool stuff.”

At the end of each episode, the “elf-testants” are judged by Santa, played by Tommy Snider, Mrs. Jingles (Samantha Turret) and a celebrity guest judge to decide who is on the “nice” or “naughty” list and one step closer to being named “Top Elf.”

Whoever wins the competition will have their wish list granted by Santa. The list does not contain items Clark or the other contestants would like for Christmas. Instead, the list goes toward a good cause in their hometown.

Clark chose the Thisbe & Noah Scott Foundation for his wish list. The foundation, which is named in honor of Thisbe and Noah Scott, who passed away at a young age, promotes research and raises awareness and support for children with neurological diseases. The Scotts died from a rare type of motor neuron disease, BVVL.

“Two of my best friends lost two children to a very rare disease and it just made me really sad, so that’s why I thought it should be my charity,” Clark said.