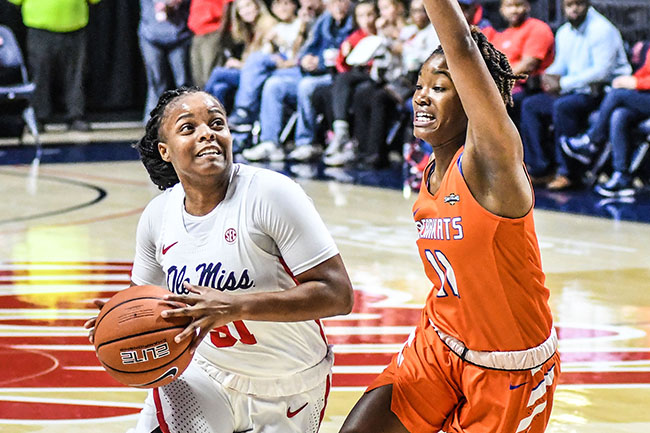 OXFORD, Miss. – The Ole Miss women’s basketball team withstood adversity and a defiant last-quarter charge by Sam Houston State, holding on to defeat the Bearkats, 75-69, in a wild game at The Pavilion on Tuesday night.

The Rebels (4-2) led by double digits for the majority of the game, holding an 18-point lead by the 4:17 mark of the third quarter and a 14-point lead heading into the final frame at 59-45. Sam Houston State put together a splendid fourth quarter, though, shooting 57.9 percent from the field and ripping off an 8-0 run to cut the Ole Miss lead to six with just 5:04 left.

The Rebels were able to briefly catch their composure after a Jayla Alexander three-pointer coming out of an Ole Miss timeout brought the Rebel lead back to nine. However, Sam Houston State put its foot back on the gas to the tune of a 10-2 run, cutting the Ole Miss lead to one with 2:42 remaining at 68-67.

The Rebels would not be denied. Clutch free throw shooting from Alexander and Deja Cage, in addition to two key steals by Mimi Reid (eight points, three assists, three steals, two rebounds), allowed Ole Miss to hold on for the win. In all, the Rebels shot a season-best 20-of-32 from the free throw line, including a 9-of-14 clip in the fourth quarter alone.

“To me, this was a phenomenal win because we had adversity and we had to respond,” said Ole Miss head coach Yolett McPhee-McCuin. “I can tell you this: these young ladies, three weeks before this, they would not have responded in the way that they did. I am just proud of them and excited to get back into the locker room and celebrate with them.”

The Ole Miss defense was ferocious throughout the game, forcing a season-best 31 turnovers – the most by a Rebel defense since forcing 40 against Mississippi Valley State on Dec. 28, 2016. Combined with a 29-turnover performance against Louisiana Tech on Nov. 23, this marks the first back-to-back games of at least 29 turnovers since forcing 33 against McNeese State on Dec. 19, 2015 and 39 against Alabama A&M on Dec. 29.

In addition to the strong defensive effort, a slew of impressive individual performances allowed Ole Miss to emerge victorious. Cage, who scored a career-high 30 points against Louisiana Tech, lit the net on fire again with 21 points and a crucial 7-of-8 clip from the free throw line. She finished the first quarter with 10 points and ended the game with a team-high 21 points and five rebounds.

Junior Valerie Nesbitt also came into Tuesday night on the heels of the best performance of her collegiate career. After becoming the first Rebel to record eight steals and eight assists in the same game against Louisiana Tech, the Bahamian native had another great game to the tune of 18 points, six steals and three assists.

“Val is probably the most competitive player that we have on the roster,” McPhee-McCuin said. “Sometimes, that is a gift and a curse for her. If she continues to figure out how to channel it, she’ll continue to have success.”

The win Tuesday night didn’t come without bad news, though, as freshman Sarah Dumitrescu left the game with a knee injury in the first quarter. The Romanian native entered as the Rebels’ top rebounder at 7.8 boards per game.

“We know that she is being examined,” McPhee-McCuin said. “Sarah is pretty tough. The game of basketball has its own way of handling things. Regardless, she is going to be a big part of our success this year and we will continue to be there for her.”

Ole Miss returns to action at the Daytona Beach Invitational this coming weekend. Ole Miss will square off against Alcorn State on Friday (Nov. 29) and Pittsburgh on Saturday (Nov. 30).

Jerrion Ealy has seen the Egg Bowl, now is…