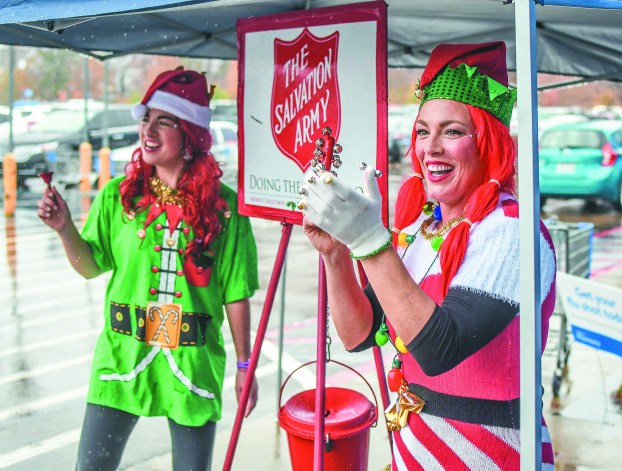 A familiar sound is soon returning outside of shoppers’ favorite stores this week.

Salvation Army’s annual Ring the Bell campaign returns on Black Friday, with volunteers ringing bells next to the world famous red kettle. The kettle, which was first used in 1891 by a Salvation Army captain in San Francisco, has become synonymous with the holiday season.

“This being our only fundraiser and it being such a wide-spread fundraiser, it’s not one people are unfamiliar with,” said Salvation Army service center director Miranda Mansell. “More often than not we find that people get really excited about it. On top of Black Friday coming right off of Thanksgiving and everybody getting into the shopping season, it makes it feel like the holidays. You really kick start the season of giving and not just gift shopping.”

The funds are used to help Oxford residents who are struggling and in need of assistance with such things as paying a utility bill, clothes or any other necessities following a disaster such as their home burning down or lost to a natural disaster. Mansell said Oxford will keep a majority percentage of the funds collected in the kettles while a small percentage is distributed regionally to help area shelters.

“The money that is raised in these kettles, it’s not putting a CEO in a fancy car,” Mansell said. “That’s not what’s going on. We pour every bit of those donations back into serving the people around us who are in need.”

While the traditional method of dropping coins and cash into the red kettle is available, the Salvation Army is adapting with the changing times of the 21st Century. For the first time they will be accepting Apple Pay by allowing shoppers to tap their phone to a sticker that will be attached to the kettle. The stickers work with new generations of the iPhone and most Android phones. Eventually there will be card readers added to the kettles in the future, according to Mansell.

Bells will not be ringing themselves and volunteers are still needed. Positions are still available, including a few paid, part-time positions. Individuals and groups can sign up for two-hour shifts. Children can sign up but they must be accompanied by a parent or guardian if under the age of 16.

To sign up up for specific locations, people can click on the following links. People can also call Mansell at the Oxford service center at 662-236-2260 to sign up.

City of Oxford names Jeff McCutchen next Chief of Police

Another person in Oxford can remove the interim tag from their job title. The City of Oxford announced on Tuesday... read more