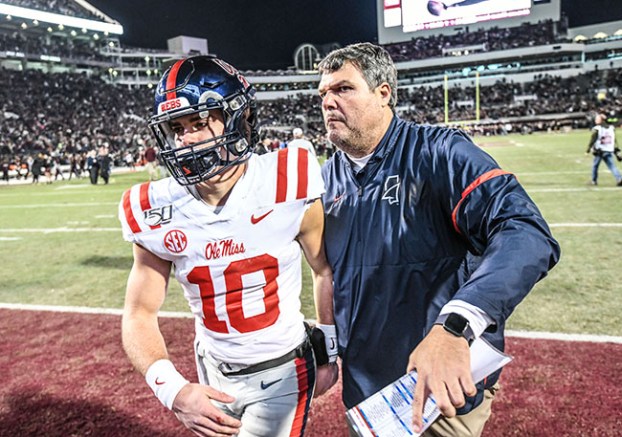 STARKVILLE – The 2019 Ole Miss football season has been headlined by questions at the quarterback position, but the Egg Bowl laid to rest not a single one of those questions.

True freshman John Rhys Plumlee played the entire first three quarters of the Egg Bowl at quarterback. Trailing 21-14 with 7:30 to play, redshirt freshman Matt Corral trotted out to the field. He would operate under center for the final two drives, making a handful of mental blunders, including an interception and another near interception, but nearly completed the comeback.

The two quarterbacks have been nothing but supportive of each other all year. Yet if both return next season, it’s unlikely there will be much more clarity in the roles between the two.

“We’ll evaluate all that moving forward,” said head coach Matt Luke when asked postgame if it’s an open quarterback competition entering the offseason. “I’ve been impressed with the way (Corral) has handled it all year. Obviously, this year hasn’t gone the way he wanted it to go.”

Corral, toward the back half of the season, has a been the 1-B quarterback to Plumlee’s 1-A. The same was true in the Egg Bowl.

When asked why the change was made late in the game on Thursday, Rebel coaches were blunt. Both Luke and offensive coordinator Rich Rodriguez said simply that Corral was the “better thrower” of the two quarterbacks. They believed the game had gotten into a third-quarter rut, and Corral’s passing gave the team the better chance to dig out of that rut.

When asked a similar question about the quarterback competition being open, Rodriguez was more outspoken.

“That’s a fair question,” Rodriguez said. “The way we run our program, the way Coach Luke runs our program, there’s open competition everywhere. I think we have to foster that at every position. Guys like John Rhys (Plumlee) and Jerrion Ealy, they want that kind of stuff, and Matt Corral, too. We have to have open competition and continue to recruit well and bring those guys in to compete.”

The kicker is that there’s a world in which both quarterbacks may not return. Oftentimes, especially at the quarterback position, if players don’t see the field they will go somewhere where they will. This is why quarterback transfer rates are at an all time high.

The Rebels have already lost one quarterback, Grant Tisdale, to the transfer portal earlier this year. That said, they do expect both Plumlee and Corral to return to compete for that job.

“They’re all freshmen; I hope they’re all back,” Rodriguez said. “But I’m not naïve enough to know, in this day and age particularly at the quarterback position, it seems like if guys are young and there’s other guys there and they think they’re not going to be the guy, they’re going to leave. They haven’t said anything to me, but I would love everyone to stay.”

Plumlee, when asked, also said he believed both he and Corral would be at Ole Miss when the spring practices start. Corral was not made available to media. Additionally, Plumlee certainly wasn’t offended by questions about an open quarterback competition, or the fact that his coordinator sort of said it was so.

“Me and Matt, we compete week-in and week-out, day-in and day-out,” Plumlee said. “When it comes game time, we’re really excited for each other, whatever happens. There at the end, when Matt went in and made some big plays, I was excited for him. I was in his corner and he’s in my corner when I’m in. So competition? Yeah. We compete everyday.”

Overall, what Plumlee did this season, not making his first start until the Alabama game, is simply incredible. In eight starts, Plumlee became just the sixth Rebel to ever rush for 1,000 yards in a single season, the first Ole Miss quarterback to do so. And as the season progressed, it wasn’t just Plumlee’s rushing that awed Rebel fans. Plumlee started to show signs as a more competent passer against LSU. Against Mississippi State, he looked like more than just a competent passer before being pulled for Corral.

Corral has been impressive at times in his own right. Off the bench in the Egg Bowl, Corral completed 6 of 12 passes for 124 yards. He both had the potentially game tying touchdown and a brutal redzone interception on the drive before. But the most impressive play was a 57-yard bomb to Braylon Sanders on a 4th and 24, needing a miracle to survive.

Both have flashed. Both are incredibly young. There’s reason for optimism in the Rebels quarterback room. But if you’re looking for answers as to who the guy will be in 2020, you’re going to have to wait.

STARKVILLE – One single word has led off more Ole Miss postgame press conferences than any others this season: “Disappointed.”... read more