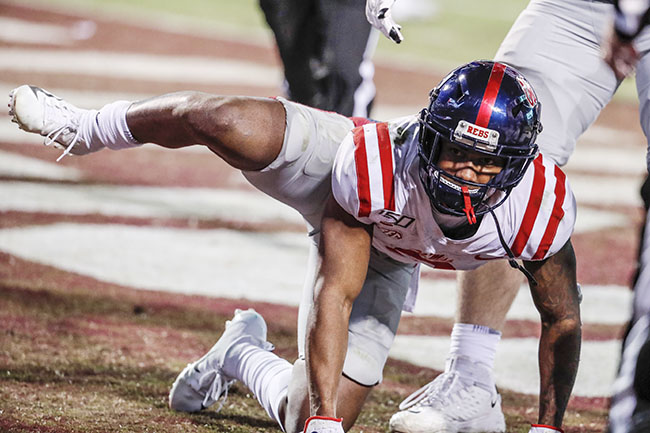 Mississippi wide receiver Elijah Moore (8) reacts following a touchdown by his team against Mississippi State during the second half of an NCAA college football game in Starkville, Miss., Thursday, Nov. 28, 2019. The act resulted in a 15-yard penalty assessed on the extra point that was missed. (AP Photo/Rogelio V. Solis)

Elijah Moore gave Ole Miss a chance to leave Starkville and bring the Golden Egg back to Oxford, but then one decision took it away.

With four seconds remaining, Moore caught a touchdown pass to get within one of Mississippi State. The Rebels had a chance to decide to either go for two, and potentially the win, or go for the tie and force overtime. Instead, the choice was made for them when Moore crawled towards the back of the endzone and hiked his leg up, similar to a celebration D.K. Metcalf did two years ago in the same stadium.

The celebration resulted in a 15-yard unsportsmanlike penalty that pushed Luke Logan’s extra point try back to the 18 yard-line. Logan missed the attempt, which would have tied the game and potentially sent the game to overtime.

For the second straight year, Mississippi State hoisted up the Golden Egg with a 21-20 victory over Ole Miss.

Prior to Moore’s costly mental mistake, the Rebels (4-8, 2-6 Southeastern Conference) made costly turnovers that put them in the position of playing catch up all night.

Matt Corral came into the game for the first time with around six minutes remaining and had success his first two passes netting 50 yards. It was Corral’s third pass that spelled doom when Mississippi State’s Marcus Murphy at the Bulldogs’ six yard-line. The Rebels were driving and trying to tie the game at 21 when Murphy picked off the pass.

Another costly error occurred earlier in the game when John Rhys Plumlee was stripped of the ball in the third quarter. The Bulldogs cashed in on Plumlee’s fumble, going up 21-14 the ensuing drive.

The decision to bring in Corral after having him be on the sidelines for 90 percent of the game in place of Plumlee was an interesting decision, but proved fruitful with the one touchdown pass. Plumlee did have his best passing game of his freshman season, completing 9-of-14 passes for 121 yards.

Corral finished with 6-of-12 for 124 yards and and one touchdown.

The Rebels’ run game was kept in check most of the game, rushing for 139 yards and two touchdowns on 47 carries. Jerrion Ealy capped his freshman campaign with 82 yards and a touchdown on 15 carries.

The Bulldogs (6-6, 3-5) saw success in their run game early, gouging one of the toughest run defenses in the SEC entering the game. They finished with 210 yards on the ground, led by Kylin Hills 132 yards on 27 attempts.

Garrett Shrader got the start for the Bulldogs over Tommy Stevens who was out due to an upper body inury. Shrader finished with 108 passing yards and 19 rushing yards.

A bowl berth for the first time since 2016 was going to be tough even with a win. Thursday’s result officially ends the Rebels’ season and they will miss the postseason for the fourth straight season.