COLUMN: Decisions, decisions: What on Earth happened Thursday in Starkville? 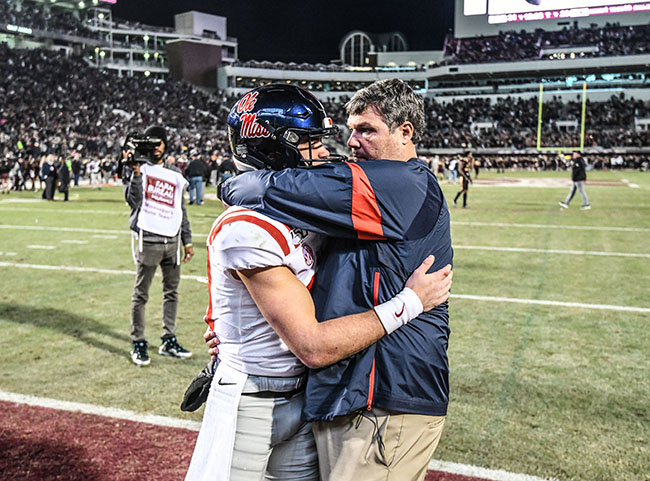 STARKVILLE – I have never seen a football game like the one I saw Thursday evening at Davis Wade Stadium.

This was my second Egg Bowl, my first in Starkville. Writing this column at 11:58 p.m., driving home in the passenger seat, I’m at a relative loss for words at the events that transpired over two hours ago. I know exactly what happened, but yet I’m still not entirely sure what happened at all.

Checking my clock to see what time it is and refreshing Twitter to see when the game ended, it’s hard to imagine that game ended over two hours from when I’m writing this now. It feels like it’s been 45 minutes.

I have seen Johnny Manziel’s Heisman campaign live. I have seen a Cam Newton five-touchdown performance during his MVP run and seen Todd Gurley make SEC defenses look like high schools during his Georgia tenure. Those all had characteristics defined by individual greatness that will make me remember them forever.

This 2019 Egg Bowl I will also remember, just for very, very different reasons. It was just weird.

A slew of the untimely turnovers, head-scratching coaching decisions and headache-inducing cowbell ringing led to the reason we’ll all remember 2019.

Elijah Moore simply lost his mind. Matt Luke called it ‘disappointing.’ I’d call it selfish and downright baffling. Take your pick of words: inopportune, inexcusable, preposterous, untimely, ludicrous, outlandish, dumbfounding and honestly just stupid. There are hundreds more words you can come up with to describe the outcome of the game that ended with Moore imitating a dog urinating in the north end zone of Davis Wade Stadium.

When that play happened, when Ole Miss’s point after attempt was backed up on the flag, everyone knew what the outcome was. That kick is going to be missed eight times out of 10 (and as a math guy and frankly a nerd, writing a sentence so based in absolutely nothing factual, this hurts me. But it’s true). Forget the fact that Luke Logan has not made a field goal longer than 40 yards this year. That kick was missed the minute Moore got flagged.

Sure, we’ll remember that moment in the end zone for a long time, but it’s far from the only thing that happened late that baffled me.

At times Rich Rodriguez looked like a bumbling lunatic. At times he looked like the evil mad scientist ready to pull Ole Miss out of the grave. I’m still not sure which of these is correct, or if the answer is just both.

I wrote postgame about the fluid quarterback situation, so there’s not a ton of need to harp on it here, but John Rhys Plumlee was having his best passing game of the season when he was benched in the fourth quarter for Matt Corral. Plumlee was 9 of 14 passing for 121 yards when he was yanked.

If you factor in two blatant drops in the first half by Elijah Moore (and 30 yards, which is a wild underestimate from the two throws and assumes he essentially falls down after completing the catch), Plumlee would have been 11 of 14 for 151 yards. That’s a quarterback efficiency of 169.17 and a career high yards per attempt of 8.4.

Despite all my efforts to make decisions for the team on Twitter from the press box, and my in-the-moment criticism of the decision (for the record, I’m still not sure it was the right one), but it nearly worked. Corral threw a horrendous interception on his first drive of the game. He took a really bad sack to back Ole Miss up to a 4th-and-24 with the game one the line.

But then he converted.

Corral hit on a 57-yard pass to Braylon Sanders with the game in his hands. He finished off the drive, connecting with Moore for what could have been the game-tying score. We all know the end now, but Rich Rodriguez’s mad-scientist formula nearly worked.

It’s now 1:03 a.m. on Friday morning, and the post-game adrenaline rush has subsided. Here’s the takeaway. We can speculate all day on who would’ve started overtime at quarterback for the Rebels or what would’ve happened if Plumlee was left in to finish the game in the last two drives. What we can’t speculate on was that we’re probably going to remember, for better or for worse, the way the 2019 Egg Bowl ended for a long, long time.