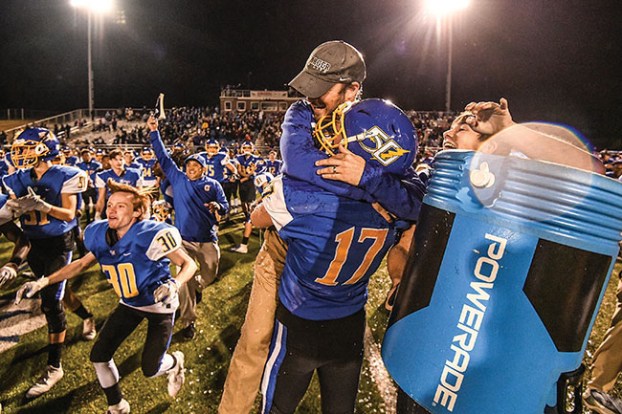 The 2019 season has seen a lot of firsts for Oxford football.

A month ago, they clinched their first regional title since joining 6A. Last Friday they advanced their first North-half final. Now, the Chargers are heading to their first 6A state championship game.

Oxford beat Starkville 25-16 on Friday night, redeeming their earlier trip down south on Aug. 30 and extending their season to include one final game – the 2019 MHSAA Class 6A State Finals.

“We’re the only ones in the world, coming in, that thought we could beat them,” said Oxford quarterback John Meagher. “We worked our butts off every single day to try and get to this point. This is a result of months, years of hard work right here.”

Going up early on a John Meagher rushing touchdown and a defensive score on a Jeremiah Pomerlee fumble recovery in the Starkville end zone, Oxford had a chance late in the second quarter to take a 25-7 lead over their rival. DK Johnson dropped a would-be touchdown pass that would have put Oxford up 18 in the second quarter. Instead, Oxford was forced to punt with 18 points on the scoreboard.

The subsequent Jack Tannehill punt was blocked, the ball rolling through the back of the Charger endzone for a safety. A tough sequence for Oxford (13-1) would end with the Chargers leading just 18-9, punting the ball back to Starkville. The Yellowjackets (12-3) used just two more plays to score again off the safety, pulling the halftime score to 18-16.

Johnson got redemption for his early mistake in the third quarter.

About an hour after dropping the potential big score, Johnson caught a pass from Meagher for a 15 yard score, this one putting Oxford up 25-16 late in the third quarter.

“That was such a hard drop. He was down about it but that’s football,” Meagher said. “There was no doubt in my mind that he was going to come back and make the next play. We were down after the earlier drop, a lot of us were, but we were kicking their butts all night. I knew he would make that play.”

Starkville quarterback Luke Altmyer had been the counter to every Charger punch all night. A junior, three-star recruit brought the Yellowjackets back just about anytime they needed it. Trailing after the first quarter, it was Altmyer with both the Starkville touchdowns to bring them back.

With 5:51 to play, trailing 25-16, it was Altmyer making the critical mistake to just about ice the game. In the redzone, Altmyer scrambled right and committed the cardinal quarterbacking sin – he threw back to the middle of the field across his body. Oxford’s Scott Norphlet was there, intercepting the pass in the endzone and returning it to midfield.

“He saw the receiver was open and I broke back on it. I was playing a different guy but came back because I saw (Altmyer) think that one was open,” Norphlet said. “He’s a great quarterback. We just practiced all week for that and it came at the right time.”

Neither team would score again.

As much as any single game is any single football game, this one meant so much more for the Chargers. Simply put, it’s validation for a season of work, a tough stretch against Starkville and a senior class that is among the most talented in the state.

“I can’t say enough about our seniors. That group of guys, they’re amazing,” said head coach Chris Cutcliffe. “There’s so many great leaders in that group. They play together like a team. I couldn’t be more happy for these guys. They deserve this.”

Oxford will play Oak Grove at M.M. Roberts Stadium on the University of Southern Mississippi campus in Hattiesburg next Friday at 7 p.m.

COLUMN: Decisions, decisions: What on Earth happened Thursday in Starkville?

STARKVILLE – I have never seen a football game like the one I saw Thursday evening at Davis Wade Stadium.... read more