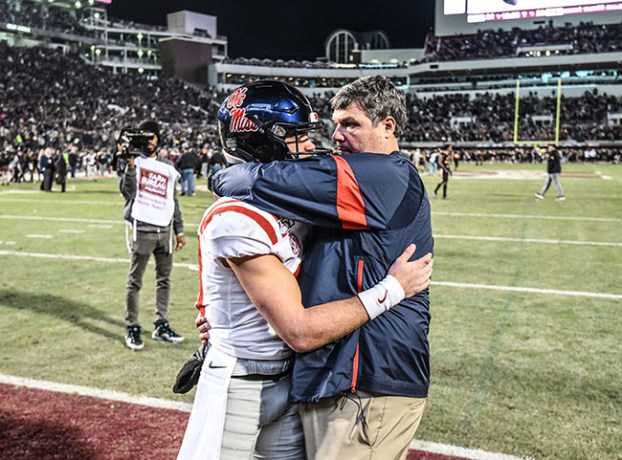 The team held a meeting at 8 p.m. Sunday, with athletic director Keith Carter officially confirming to the team the decision to move on from Luke and Carter’s subsequent vision for the future and direction of the Rebel football program.

Exiting the team meeting, some players said things that can’t be printed and many were visibly upset.

Arriving from Hattiesburg later Sunday night to receive the news and meet with Carter was freshman quarterback John Rhys Plumlee. Plumlee spoke to media outside the Manning Center following his conversation with Carter.

Others were more direct with their statements. Freshman defensive lineman Patrick Lucas was one of a group of players who stormed out of team meetings early.

“I didn’t think he was going to get fired, honestly. I don’t think he should have gotten fired,” Lucas said. “What (Carter) was saying, that wasn’t what I wanted to hear. … I couldn’t take it any more. Hearing that was just awful.”

Plumlee said that sentiments made to him were that the program expects to find a new head coach within a week and a half, potentially sooner.

He also emphasized that Carter mentioned that he believed, given more time, Matt Luke could have turned this program around.

“We love Coach Luke and we don’t want to see him go,” Plumlee said. “We know (Carter) has our interests at heart, even if it’s tough to see. Because we love Coach Luke. That’s what makes it so hard. But we know he has our best interest at heart and we appreciate him for that. I think we just have to be patient and see.”

The young quarterback said he found out about the news while home in Hattiesburg during his Thanksgiving break.

The players are part of a group message, and Plumlee said the team started conversing amongst themselves when the news and the subsequent team meeting was announced.

“Yeah, (it was a surprise) for me. And I think it surprised a lot of guys on the team,” Plumlee said. “Because we love Coach Luke. I know I keep coming back to that, but we do. I think we all saw the program turning around this year. We were in every game. We were close. Even though it was a losing season, we were there every time.”

The early signing window, which opens Dec. 18, impacts Ole Miss’s need to fill the open position as soon as possible for recruiting purposes. As Plumlee said, a coach is expected to be hired within a week and a half at the latest.