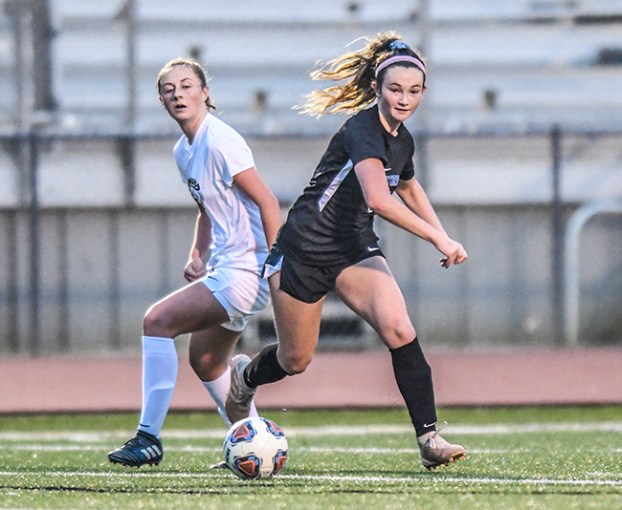 The Oxford High School girls’ soccer team finished last season 18-2-1, losing in the second round of the state playoffs.

It’s not that they were upset with the overall record, but they’re taking extra measures to ensure this season, they peak in February, not December.

For the first time, the Lady Chargers have been wearing GPS tracking devices during all practices and games since the start of the season. The small monitors were gifted to the team from the booster club, allowing them to track a handful of metrics with one ultimate goal – playing their best soccer when it matters most, and having their best players available for those games.

“We’ve been able to track a ton of data. We’re looking at explosive data, we call it session load,” head coach Hunter Crane said. “Basically, it takes into account how hard they’re working over distance and sprints. It has a little algorithm that comes in and it gives them a score. We’ve been able to really look at that and see, for example, our attacking midfielders the other night were averaging above five miles per game with a load score above 150, which is really good.”

A load number of 150 doesn’t really mean anything in itself to the average observer. So, let’s give an example. Earlier this month, the girls played a game at Lewisburg on a Friday evening. Sophomore midfielder Grace Freeman recorded a load score of 212 in the game, well above that average 150 Crane mentioned. She then went on to play three club games over the subsequent weekend.

When the Chargers returned to practice the following Monday, Crane and staff gave Freeman the day off.

Just knowing that player X runs 6 miles a game is a cool thing to know, but it’s really what they do with that knowledge that matters – hence resting Freeman, theoretically, and hopefully preventing her from future load-based injuries (shin splints, stress fractures, etc.).

“Hopefully, we’ll be able to be a lot fresher later in the year. We’ve made a lot more subs this year because of that. It’s just in the back of your head,” Crane said. “It’s both trying to not wear ourselves out, but it’s also trying to keep us healthier.”

These sorts of tracking technologies have been part of the college and professional game for quite some time now. Some staffers from the Ole Miss soccer team were actually the ones who helped Crane and his Oxford staff set up the system and teach them how to interpret the data produced.

In addition to that load score, which is generated from an algorithm combining a handful of metrics, the GPS’s track miles, top speed, average sprint speed and heart rate. Even during practice, the team can use the heart rate information, for example, to try and keep the girls within that perfect aerobic training threshold, about 70 percent of their max heart rates.

They can then use that practice data to adjust practice schedules, like they did with Freeman earlier.

It’s a fun little wrinkle and toy, sure. But ultimately the team is still getting used to how to gather and interpret the data. It’s only been six games after all – 6 wins. However, yet again, these November games aren’t the goal.

“We’re going to try and peak at January and February instead of December. That’s the key,” Crane said. “There’s actually maybe more that we can do with it out of season, but for right now what we’re looking for in-season is playing time and that load score and a few other things. But as I said, it’s to get that peak in the right time and a big part of that is hopefully staying healthy.”

The 2019 season has seen a lot of firsts for Oxford football. A month ago, they clinched their first regional... read more