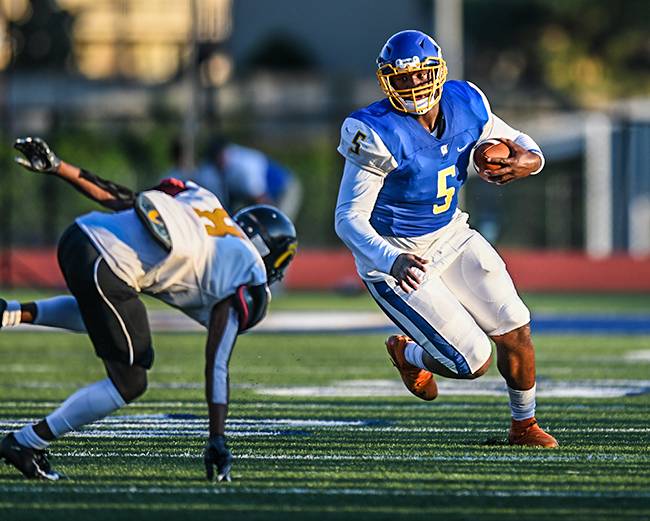 The most sought-after recruit in the University of Mississippi’s own backyard found out about Matt Luke’s firing on Sunday the same way most of the fanbase did – via Twitter.

JJ Pegues, a four-star tight end recruit from Oxford High School, said he was sitting on a couch in his living room, scrolling through Twitter yesterday when the news began to break that Ole Miss had fired its head coach.

For a recruit, a senior who had narrowed his college choices down to Ole Miss, Alabama and Auburn, that decision makes a huge impact.

“It hurts a little bit, because he’s been recruiting me ever since I was in seventh grade,” Pegues said on Monday. “I was thinking about going to them. Now this changes a whole lot. It just depends on whoever comes in to be the head coach.”

Auburn head coach Gus Malzahn was in Oxford on Sunday for his in-home visit with the Pegues family. Today, it was Alabama head coach Nick Saban meeting with Pegues.

Pegues was scheduled to have Luke come by for his official, in-home recruiting visit on Tuesday.

Now, all of that is up in the air. Pegues is essentially left out in the dark and Ole Miss is inherently at a disadvantage landing the guy who grew up miles from campus.

“I’m clueless right now. I don’t know what’s going on,” Pegues said. “I’ve talked to (a few people), just talking through everything. I talked to (Josaih Hayes) a few weeks ago. He said then the reason he had decommitted is because he thought Matt Luke was going to get fired.”

Hayes, the No. 2 ranked player in the state of Mississippi, from Horn Lake, had decommitted from Ole Miss back in October.

Throughout his entire recruiting process, Pegues has always insisted that the feeling among the players, the bond they share, is what he was searching for most in his college home.

As reported yesterday, there is certainly a lot of unrest in Oxford right now among the players. Given time to process, some players have already reportedly entered the transfer portal. Others who were upset with the decision have since come around and apologized, either to athletic director Keith Carter or on social media, for the way they reacted to the news.

For Pegues, as much as it’s important who the Rebels hire to replace Luke, that atmosphere and feeling around the building is still what he says is most important when he settles on a school.

With defensive coordinator Mike MacIntyre taking over as the Ole Miss interim head coach, it will be on his plate as well as other assistants in recruiting players like Pegues and others. Pegues himself has never formally committed to Ole Miss, but had them among his short list. A slew of players who had pledged themselves to the Rebels have subsequently decommitted, and it will be up to what’s left of the current staff and whomever Ole Miss brings in to replace Luke to convince them to come back.