12 names Ole Miss should look at for head coach, categorized 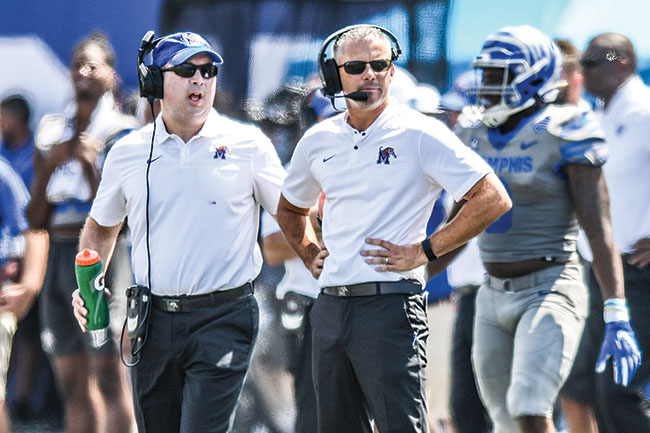 Ole Miss athletic director Keith Carter said on Monday that the university would use Chad Chatlos of Venture Partners, the same search firm that led the hiring of Kermit Davis, to help conduct their head coach search.

That said, Carter himself will be handling the interviews and making the final decision on who will replace Matt Luke as the Ole Miss head football coach.

There are some obvious names Ole Miss will likely look at and interview for head coach, some of whom are right here in their own backyard or building. There is also a handful of more national names that should be brought up. Instead of just listing potential candidates, we broke them down by those representative categories.

Ole Miss is one of those rare schools that just has a lot of head coaching talent and experience in the building. MacIntyre has six years of power-5 head coaching experience at Colorado, as well as three prior head coaching years at San Diego State.

When MacIntyre came to Ole Miss for the first time this past offseason, he inherited a defense that allowed 36.2 points per game in 2018 and ranked No. 90 in the nation by SP+. After just one season in Oxford, that defense allowed 26.5 points and ranks No. 43 national in SP+. That alone, plus the fact that he was named interim, should get him serious looks.

Things with Rich Rod didn’t transition as smoothly as they did with MacIntyre. That said, he’s still a guy with nine years of power-5 head coaching experience, plus seven more years at West Virginia when they were part of the Big East. The Ole Miss rushing offense ranked No. 12 nationally this year, and there were flashes that the passing game was coming around toward the end of the season. That said, it says something that MacIntyre was pegged interim over Rodriguez.

Napier has just two years of head coaching experience, but comes from both the Dabo Swinney and Clemson background of offense, plus the Alabama coaching tree. When Swinney was hired to the full-time job from the Clemson interim, Napier was promoted to be his offensive coordinator and quarterbacks coach, a position he operated for two seasons from 2009-10. He later served as an offensive analyst at Alabama in 2011 before returning to Tuscaloosa to serve as the wide receivers coach from 2013-16. The year prior to arriving at ULL in 2018, the Ragin’ Cajuns offense finished No. 75 nationally in offense by SP+. This 2019 season, his second at Louisiana, the Ragin’ Cajuns offense currently ranks No. 16 in the nation.

This is the backyard hire, and it would likely take Ole Miss digging deep into the checkbook to lure Norvell away from what looks to be a very stable Memphis position. This 2019 season marks the fourth year that Norvell has coached Memphis. He’s reached a bowl game every single season and twice, including the current campaign that sits at 11-1, reached the 10-win plateau. He’s even gotten Memphis ranked in the AP top-25 a handful of times, twice peaking at No. 16 in the nation. Currently, his offense ranks No. 7 in the nation according to SP+.

Fritz would be, by far, the most experienced head coach candidate for the Rebels. He’s never had a power-5 job and has only had an FBS job since 2014, but Fritz has 27 years of head coaching experience. Fritz worked himself up from a junior college coach to a division two coach to a division one FCS coach to take his first FBS job at Georgia Southern in 2014. Fritz has now been at Tulane for four seasons. Some of the advanced numbers on Fritz don’t match up with the prior two candidates over the long haul, but Tulane did sport the nation’s No. 35 offense this year by SP+. The selling point on Fritz would be his ability to turn a program around. At Tulane, he inherited a team with back-to-back three win seasons. By year three, he had Tulane in a bowl game.

Like Fritz, Clark is a builder. He just did it very differently. Bill Clark has only been a head coach for five years. That said, he took a UAB program that a literally shut down for the 2015 and 2016 seasons and won eight games in 2017. In 2018, he won 11 games including a Boca Raton Bowl. This season, Clark has the Blazers sitting at 9-3. Unlike the prior candidates, Clark is a defensive guy. The Blazers in 2019 rank No. 119 in offense but No. 25 in defense by SP+.

Kiffin was the hardest of the group to place within a category. He might be a ‘realistic pipe-dream’ if one wanted to merge the prior two groups. Kiffin has shown interest in leaving FAU. False, or at least to this point unconfirmed, reports earlier this week claimed he had accepted the Arkansas job. People claim to have seen the Ole Miss plane in Boca Raton. Regardless, Kiffin is a guy with two years of NFL head coaching experience and five more at major power-5 jobs split between Tennessee and Southern California. He’s the flashy, sexy hire, but he also brings results. This year’s FAU team is 9-3 with two of their three losses to, at the time, No. 5 Ohio State and No. 18 UCF.

Internet trolls hacked Twitter accounts on Monday announcing the Ole Miss hire of Mike Leach. It wasn’t true. Leach is a name, with his high flying air-raid offense, that gets connected to a ton of high-level jobs. But he really has shown no desire to leave Washington State. Also, his track record isn’t great in the win column. The passing numbers are ludicrous year in and year out, but this Washington State team is 6-6 this season. In fairness, they did go 11-2 a year ago. Leach would be really, really fun pick. But there’s simply no evidence he’s even interested.

Keith Carter made it known he was looking for a current FBS head coach or a power-5 coordinator. Brady kind of fits that role, being a ‘passing game coordinator,’ but is not the LSU offensive coordinator. That said, Brady’s one year in LSU speaks for itself. He’s largely responsible for Joe Burrow’s turnaround and likely Heisman trophy winning campaign. All that said, many who cover LSU believe he’s a guy that has his mind set on the NFL if he were to leave Baton Rouge.

All the names in this category are 36 years old or younger, and have one or zero years of head coaching experience. They’re not likely to get a serious look or likely not prepared yet for a power-5 job, especially in the SEC. That said, they’re names that people are interested in for a reason. In his first year at head coach, Drinkwitz has Appalachian State at 11-1 with the nation’s No. 32 offense by SP+.

Golding would have been a more sought-after name a year ago. He’s mostly on this list because he expressed interest in Ole Miss this time last year, before Alabama extended his contract and gave him a pay raise. It may seem like Alabama’s defense isn’t that of earlier this decade, and that’s because it isn’t that caliber. They just gave up 48 points to Auburn in the Iron Bowl. That said, the advanced numbers still have them rated No. 7 in defense nationally.

The name Graham Harrell may sound more familiar as a quarterback. At Texas Tech, it was Harrell who connected in 2008 with Michael Crabtree in the corner of the end zone to beat No. 1 Texas and keep Colt McCoy and the Longhorns out of the national championship game. Now, the USC offensive coordinator is one of the more respected and innovative offensive minds in football, despite being 34 years old. The USC offense ranks No. 9 by SP+ this season.