Rebels can’t keep up with No. 24 Butler, drop second straight 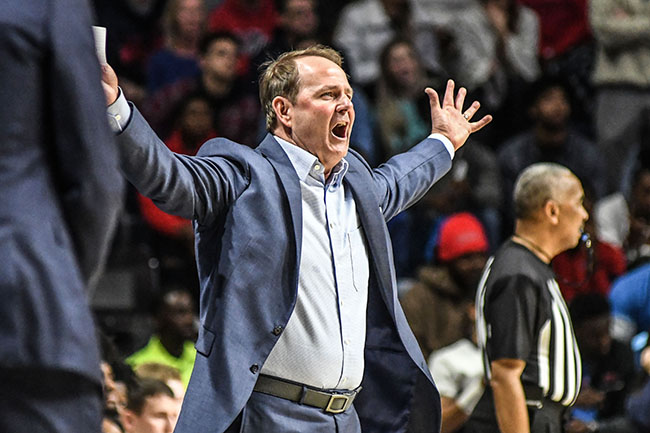 The Rebel hoops’ return home to The Pavilion did not quite go to plan on Tuesday night.

“I thought our team made some progress in some areas. But as you see we’re still struggling to score,” said head coach Kermit Davis. “We had a lot of good looks tonight, we just have to be better.”

The game script looked very similar to the game this past Wednesday against Penn State. Ole Miss struggled out of the gate offensively, finding themselves down big at half. Where Ole Miss rallied back from a 21-point deficit against the Nittany Lions, they couldn’t quite do the same on Tuesday night against Butler (8-0).

Trailing by as many as 16, Ole Miss cut the Butler lead to as little as four with just under nine minutes to play. Back-to-back threes from Breein Tyree, followed by a transition layup also from Tyree got Ole Miss as close as they had been since early in the first half. The game would never get under four points.

Simply, Ole Miss dug themselves in too deep of a hole to climb out of early on Tuesday evening. The Rebels shot just 33 percent (13 percent from long-range) in the first half against Butler, while allowing the Bulldogs to shoot 55 percent on their own. Despite the early run to start the second half, the defense just couldn’t pick up the slack.

Ole Miss’s offense rebounded in the second half, tying Butler with 36 points and shooting 46 percent. However, the Bulldogs were still scoring very efficiently at 48 percent. They would continue to slowly pull away down the stretch, winning 67-58.

Coming off the bench for the first time this season, Tuesday night was senior Breein Tyree’s best game of the season. He scored 22 points on 8 of 16 shooting, tying his career high in rebounds with eight. Like Tyree, Khadim Sy also did not start because of practice related issues.

“Breein was a minute late to practice yesterday,” Davis said. “Khadim (Sy) didn’t practice well yesterday. That’s why we did that. I thought they both came back with great attitudes and played the best day that they’ve played.

Ole Miss gets their next chance to get back on the win column on Saturday afternoon against Cal State Bakersfield, Rod Barnes’ return to Ole Miss.