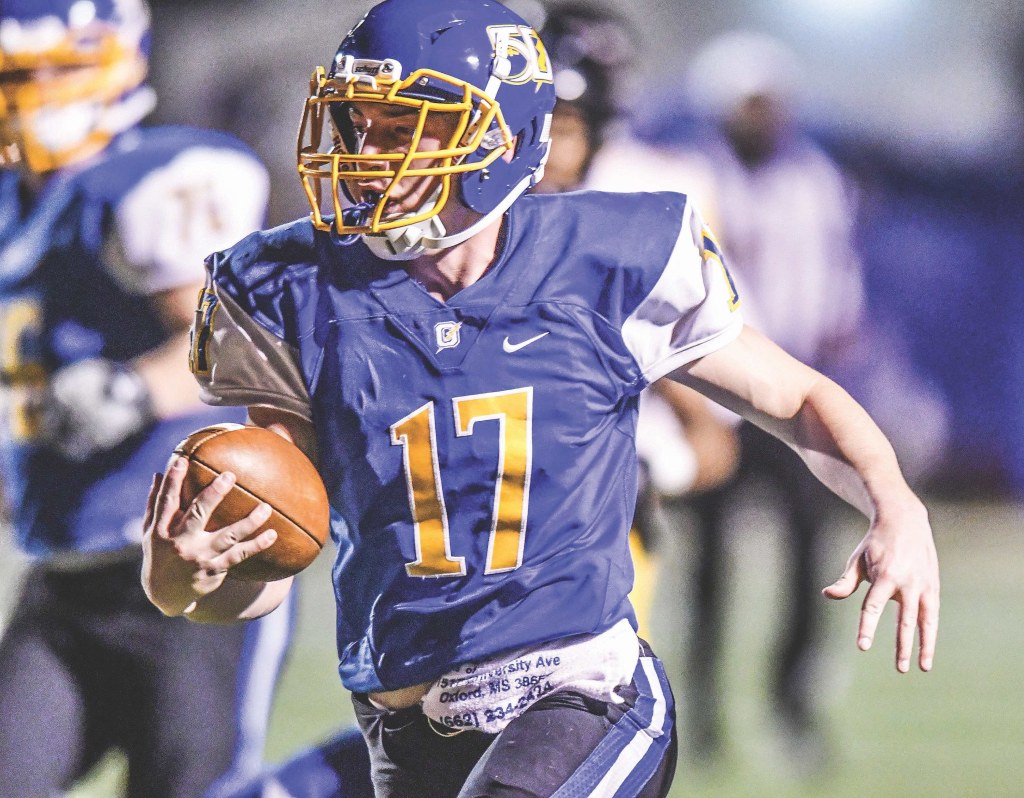 The story of the 2019 Oxford football team chasing the program’s first state title starts in middle school – for many on this team, it even goes back to Peewee football.

In an age of transfers and kids moving in and out of school districts, the core of this Oxford Chargers team has been playing together for half a decade or more.

As they chase the first title in Chargers history, they’re aware of the history and they’re well aware of their place in it.

“It all started in middle school. We’ve been playing together since we were young,” senior linebacker Kiyon Williams said. “Now, this is our last game all playing with each other. We just have to lay it out on the line and bring Oxford its first title.”

Williams and his fellow members of this senior class were in sixth grade when the 2013 Chargers went undefeated through the regular season, entering the 5A state title game at 14-0. That group, with a sophomore group of Jack Abraham, DK Metcalf and Kenzie Phillips, lost to Picayune 42-35.

For three straight years, as this current senior class went through middle school football, they watched that group lose in the state championship game. Those memories of defeat set up where Oxford is today.

“We’ve been talking about this ever since seventh grade,” senior JJ Pegues said. “We watched DK (Metcalf) and those boys, three years in a row losing. We felt like us being undefeated in the eighth grade for the first time in Oxford history, we feel like we can win state first time in history.”

As aforementioned, it’s not exactly normal for a senior class to be so tight, to have been playing together for so long.

Oak Grove, for example, will be starting a quarterback in the State title game against Oxford who just moved into the district over this summer. In reality, having kids come and go like that is more common than the alternative.

But with the Chargers, some of these kids have been here all the way back to time with the Oxford Buccaneers. They know each other off the field and, more importantly on Friday night, they know exactly what they’re going to get from each other inside the lines.

“It’s like a band of brothers. Just like a regular family, I got your back and you got my back,” Pegues said. “Going into this game, we feel like we’re a better team mentally and physically just because we know each other. I know I can depend on these guys.”

Current Oxford head coach Chris Cutcliffe coached wide receivers under Johnny Hill on those teams, which finished as the state runner-up for three straight seasons from 2013-15. He took over the head coaching role in 2016, but Cutcliffe had his eye on the group now known as the Oxford seniors since they were in middle school.

That middle school class ran the table on season, the first time that had happened at Oxford. That success caught the eye of their future head coach. Pegues, specifically, played just a handful of ninth grade drives before Cutcliffe noticed what he had, calling him quickly up to varsity as a freshman.

But as impressive as they are between the lines on the football field, and much as that record speaks for itself, Cutcliffe wanted to talk much more just about what this group means to him and each other.

“It’s a fantastic group. People always talk about how teams go wherever your seniors lead them. And the leadership in that group is phenomenal,” Cutcliffe said. “They play for each other so well and they’re such a close-knit group. They genuinely care about each other and want to see each other be successful. It’s not about selfishness or ego or individual success. It’s really just about having the team succeed. That’s why it’s so fun watching them play.”

Friday night at 7 p.m. from M.M. Roberts Stadium in Hattiesburg against Oak Grove is the last time Cutcliffe will get to watch this group play a game together.

The 6A state title game marks the end of a season littered with firsts for the Chargers. They won their first 6A regional title and their first 6A North-half game. Now, they’re in search for their first ever state championship.

But this 2019 season hasn’t always been easy for Oxford. Week two, all the way back in August, the team got blown out on the road in Starkville. Falling down 24-0 in the first half, Oxford battled back to cut the game to 24-17 before surrendering three late touchdowns in what would be an ugly 45-17 loss.

A week ago they got their revenge, beating Starkville 25-16 to win the North-half. According to their quarterback, Oxford never would have been in the position they’re in this week without that humbling August loss.

“Seeing the level of competition like Starkville early in the year is huge,” senior John Meagher said. “When you make it to this point, our last three games have been huge, big-time games. When you don’t play a team of that caliber early on, you don’t know what to expect. So we had a taste of what we would be in for last week and now with Oak Grove.”

Oak Grove is on that similar trajectory. After a series of early-season losses, the Warriors have won eight straight to reach their second straight state title game. They lost a season ago in this game to Horn Lake.

And it’s not like the Warriors are a young or inexperienced team either. Sure, they may have a quarterback in his first year with the team, but he’s a senior quarterback. Their five starting offensive linemen, two leading receivers and three leading rushers are also all seniors.

Friday night in Hattiesburg will likely come down to this question: Which senior class can impose their will on the other? For the Oxford group, it’s been something they’ve been asking themselves for years.