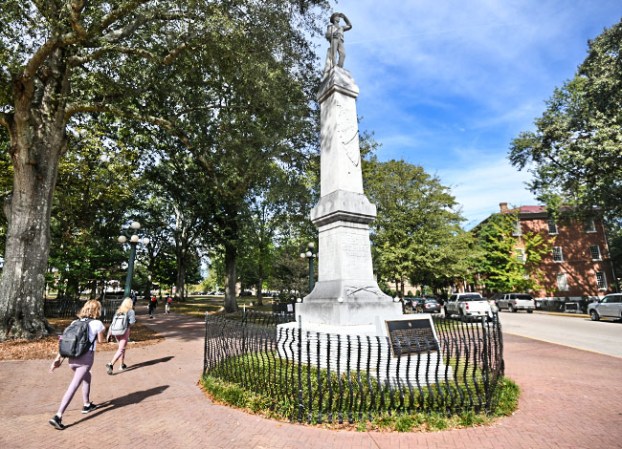 The IHL Board of Trustees voted on Thursday to approve the University of Mississippi's relocation plan for the Confederate statue currently located on the Lyceum Circle. The statue will be moved to the Confederate cemetery behind C.M. "Tad" Smith Coliseum. (Bruce Newman, Oxford Eagle)

Another domino has fallen toward relocating a controversial Confederate statue located in the heart of the University of Mississippi’s campus.

The Mississippi Department of Archives and History approved the University’s relocation plan to move the statue from the Lyceum Circle to a location behind the C.M. “Tad” Smith Coliseum, in front of the Confederate cemetery. The Department’s Board of Trustees unanimously approved the plans during their meeting in Jackson on Friday.

Plans were sent to the MDAH in August in hopes of the case being heard during their October meeting. Instead, the case was pushed back to this month’s agenda due to “the complexity of the move, both the development and the review of the specs have taken longer than we had anticipated,” according to the MDAH in a letter sent out by the University in October.

The relocation plan was announced by the University on Aug. 28, stating if all necessary parties involved gave their stamp of approval, the project would begin and take up to 90 consecutive days.

“As mentioned in previous messages to our campus community, the next step involves the submission of an agenda item from the University to the Mississippi Institutions of Higher Learning (IHL) to request approval to proceed with the relocation,” Chancellor Glenn Boyce said in a statement Friday. “MDAH approval was required before the request could be submitted to IHL. With MDAH approval in hand, we will move forward. Our university leadership will keep you informed as the relocation process continues and will provide further updates moving forward.”

The movement to relocate the statue picked up momentum in March following a pro-Confederate march and rally in support of keeping the statue where it currently resides, which was held on Feb. 23. The University’s Associated Student Body passed a resolution, declaring its desire to have the statue moved, which was followed by resolutions being passed by other campus government bodies.

“As we move toward this important change for our university, the university administration remains committed to abiding by the state rules and laws and IHL policies that govern all construction projects on our campus,” said then-interim chancellor Larry Sparks in a statement released in October.

With the MDAH’s approval in hand, the issue now moves up to the Institutions of Higher Learning’s Board of Trustees. The IHL Board is the final governing body that has to give its approval before the statue can be moved.

The IHL Board’s final approval could come as early as before Christmas. The final board meeting of the IHL Trustees is scheduled for Dec. 17, which is the earliest the case can be added to an IHL agenda.

Keith Carter stood in the Burns Team Meeting Room on the University of Mississippi campus on Nov. 22, and said... read more