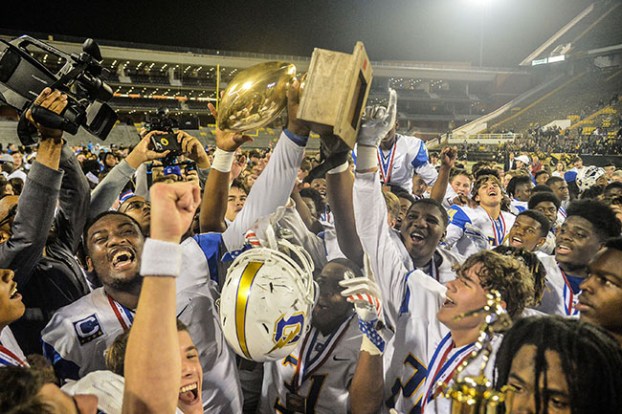 HATTIESBURG – Oxford has been so close, so many times. Friday night in Hattiesburg was simply an unbelievable way to win the school’s first-ever MHSAA state championship.

“We’ve been counted out all year. All year they told us we were too short, too little for 6A. We showed them all,” senior JJ Pegues said. “Take me to Oxford. I want to go celebrate.”

After striking first to go up 3-0, Oak Grove made their presence known early.

“It damn near took all of us”

Oxford QB John Meagher can tell the story better than I can ⬇️⬇️ pic.twitter.com/iNXJ333Cno

“The halftime talk wasn’t anything out of the ordinary,” head coach Chris Cutcliffe said. “We just told them this is what we do. We don’t back down when we’re facing adversity. We just put up more steam and we keep going. And man, that’s what we did.”

But Oxford wasn’t dead. On the third play after halftime, it was the two most likely culprits for Oxford connecting to pull them back into striking distance. John Meagher hit JJ Pegues deep, a 62-yard touchdown strike where Pegues very nearly could have fallen down after a near-tackle by an Oak Grove defender. Instead, he maintained his balance, finishing off the long touchdown strike to cut the Oak Grove lead to 21-10 early in the third quarter.

The Chargers then forced a three-and-out from Oak Grove, and just like that, had a chance to cut it to one score. This time, it was Cutcliffe magic. Meagher would score on a 23-yard rush that next Oxford drive, a beautiful play design from Cutcliffe. Meagher faked the end around handoff and instead kept it himself the other direction for the Oxford score. Oxford failed on a fake 2 point conversion, but just like that, it was 21-16.

Just three drives later, midway through the 4th quarter, Oak Grove stared down a 4th and goal from the one-yard line, still leading 21-16. Instead of kicking the field goal to go up eight points, the Warriors tried to put the finishing touches on the game. Going for it on fourth down, Warrior quarterback Damon Stewart was stuffed at the goal line, a turnover on downs.

Oxford’s KJ Wadley busted a 54 yard run on the ensuing Oxford drive, setting them up with an opportunity to take the lead. For the second time on the same drive, it was John Meagher throwing a fade to JJ Pegues that did the damage. Striking from 21 yards out, Oxford took their first lead since the first quarter. Lining up in the heavy set to go up three points with a two-point conversion, Pegues faked the power run and threw for the two-point score to take a 24-21 lead with 4:52 to play.

Oak Grove had more than enough time, but they didn’t have time to be conservative. Facing another fourth down, this one with 2:20 to play in their own territory, the Warriors had to go for it. On the stuff from just three yards away were a handful of Chargers. They had essentially iced the game with another fourth down stop.

The true icing on the cake came, again, from Meagher. His 25-yard rush on 3rd and goal truly put the game out of hand, taking the Chargers up 31-21, the final score.

“It’s incredible. We got to halftime and everyone was real down. But that’s this team in a nutshell. Everyone fights for each other to the death. There’s absolutely no selfishness. We came out on fire. It took literally everyone to get this done,” Meagher said. “We all believe in each other no matter what. We knew we were going to come out and do this. … It damn well took all of us, but we did it.”

Meagher finished the game with 110 passing yards and 152 rushing, scoring two touchdowns and passing for two others. Pegues totaled 141 yards from scrimmage with two receiving touchdowns. The undersold hero was the Oxford defense, holding Oak Grove scoreless in the second half.
The game ends the miracle Oxford season. A senior class that watched the Chargers come up short three straight years from 2013 to 2015 pulled off exactly what they’ve been dreaming about since middle school. Oxford is your 2019 MHSAA 6A State Champions.

Ole Miss is simply struggling to score in basketball right now. Over their last two games, a 41-point loss to... read more