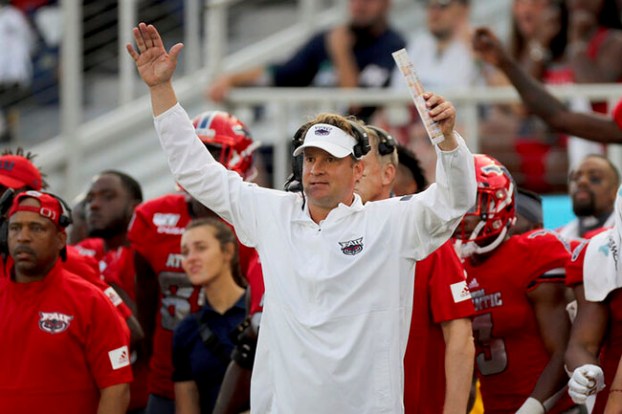 Ole Miss has found their man.

The University of Mississippi has confirmed prior reports that Florida Atlantic head coach Lane Kiffin will be the next Rebel head football coach. The news was first confirmed by the EAGLE Saturday morning. Kiffin will be introduced on Monday by Ole Miss, bringing the coach back to the Southeastern Conference.

“I am truly honored and humbled to join the Ole Miss family, and recognize this as a special opportunity to lead Rebel Football into the future,” Kiffin said. “I am especially grateful to Keith Carter, Chancellor Boyce and the entire Ole Miss family for their trust and confidence. Our staff and I will work tirelessly to recruit and develop successful players for this program, and I look forward to producing many exciting memories to add to Ole Miss’ storied football legacy. I am excited to get to Oxford and begin the groundwork of building a championship program that Mississippi’s flagship university deserves, and I’m thrilled to be back in the greatest athletics’ conference in the nation. Hotty Toddy!”

Kiffin will return the SEC, where he coached just a single year as the head man at Tennessee, as well as spending three seasons as Alabama’s quarterbacks coach and offensive coordinator under Nick Saban. However, the road to Oxford led him on a bit of a roundabout journey.

In 2007, the Oakland Raiders hired Kiffin, the then-Southern California offensive coordinator to be their head coach. Just 31 at the time, Kiffin became the youngest head coach in NFL since 1946. It took just two years in Oakland for Kiffin and Raiders’ owner Al Davis’ relationship to sour, leading to a very unsanctimonious exit from the Bay Area.

From Oakland, Kiffin wound up with the Tennessee Volunteers, his first head coaching job in college and his only SEC head coaching job prior to now. He spent just one year in Knoxville before bouncing back to Southern California to fill the void left at USC by Pete Carrol, who took the Seattle Seahawks job in 2010.

Kiffin would later be fired two games into the 2013 season at USC, left at Los Angeles International Airport by the USC administration. From there, Kiffin spent three years rebuilding his image in Tuscaloosa.

In an age earlier this decade, when Alabama won with pro-style offense and defense, Kiffin’s arrival in 2014 brought the Crimson Tide into the modern offensive era. In Kiffin’s first year in Tuscaloosa, Alabama finished No. 5 nationally in offensive efficiency, according to SP+.

As with each of his prior tenures, he wasn’t at Alabama long. Having accepted the head coaching job at Florida Atlantic in December 2016, Nick Saban relieved Kiffin of his offensive coordinator duties during the college football playoff.

His stint at Florida Atlantic, while under the radar, had its own successes. Kiffin went 11-3 in his first year in Boca Raton, beating Akron 50-3 in a bowl game. His 2018 season went just 5-7, however he’s bounced back again this season, leading the Owls to a 10-3 record including an win over UAB in Saturday’s Conference USA Championship game.

“I couldn’t be more excited to welcome Coach Kiffin to the Ole Miss family,” said athletic director Keith Carter. “As we entered this process, we were looking for energy, innovativeness and a program builder who could excite our student-athletes and fans. Coach Kiffin checked every box and is a home run for our program. I look forward to locking arms with him to take Ole Miss football to a championship level.”

The hiring of Kiffin is no doubt exciting for Ole Miss fans. However, there’s no way to acknowledge it without accepting that it comes with its flaws. As influential and adaptable as his offenses have been over the years, Kiffin hasn’t spent more than three years at a job since 2006.  Many of his prior stops end with controversy and turmoil. Regardless, there’s reason for excitement in Oxford.

It’s still early in the season, but a crosstown soccer game went in favor of the Lady Commodores when they... read more