Charger hoops return home from DC ‘trip of a lifetime’ 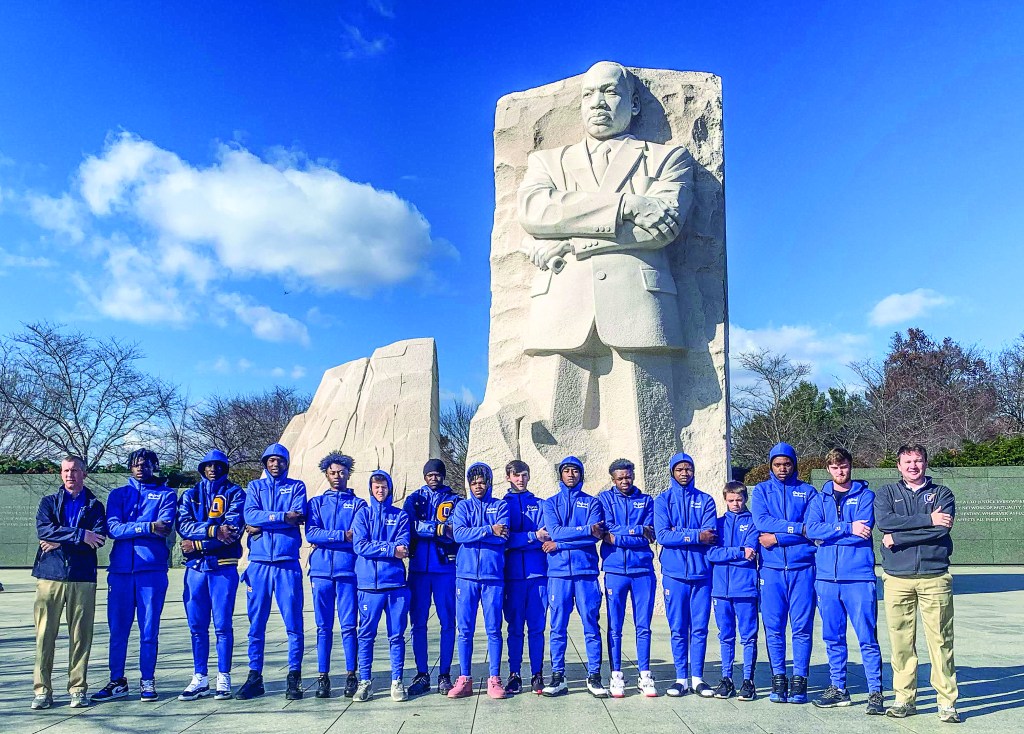 The Charger hoops team played in an eight team Quaker Classic tournament at Sidwell Friends School in Washington, D.C. over the past weekend, one of just two non-DMV metro schools to travel to the tournament.

A large contingent of the Oxford basketball team that went to the nation’s capital this past weekend had never even been on an airplane before. Returning home to Oxford, head coach Drew Tyler said he thinks he has one of the more tightly knit teams he’s had in his tenure.

Oxford went 1-2 in the tournament, dropping their first two games to Wilson High School and St. Albans by a combined 13 points before being KIPP College Prep 73-62 on their final game of the trip.

From a basketball standpoint, the play of senior guard Kylan Blackmon was what stood out the most. Tyler said that, in a field that contained several talented guards, Blackmon shined above all the others.

Over the course of the tournament, in which Oxford played three games, Blackmon averaged 32.3 points, 10 rebounds, 3.2 assists and 2.6 steals. In the team’s over KIPP College Prep to end their trip, Blackmon went for 40 points and 12 rebounds.

However, for Tyler and the Chargers, the biggest benefit of the trip may come off the court.

“We’re traveling a long ways to play the same sport we play here at home. What I liked is we’re playing three games in three days, and there’s a trophy at stake,” Tyler said. “The players had to be able to handle the operational part of the travel and still take care of a 32-minute basketball game. I think it builds a more mature student-athlete, a more mature teenage basketball player. When you get teammates away from their normal setting, they have to bond. So we brought home a closer-knit team.”

The team took a good bit of time on the trip sightseeing. As part of the trip, they visited the Lincoln Memorial, Vietnam War Memorial, Martin Luther King, Jr. Memorial, National Museum of African American History and Culture, Arlington Cemetery and the United States Capital Building.

As mentioned, the trip was the first time flying for many. For others, it was the first time trying to navigate a complicated D.C. metro system. However, traveling with coach Darren Coffey, one of Tyler’s good friends, and the Calhoun City team, Tyler said he thinks he saw the team grow up a good bit in one weekend.

“As a 50-year old adult, as a teacher and a coach, I know there’s the student side of them and the athlete side of them,” Tyler said. “I think a trip like this lets them realize there’s the other side that’s not just basketball. That’s what you gain from this, taking them on trips like that. There’s liability and risk involved, but it’s worth it.”

In addition to the sightseeing and playing in games themselves, the team got a chance to go up to College Park, Md. to see the No. 4 team in the nation Maryland Terrapins play against Notre Dame. They also went to a Washington Wizards vs. Philadelphia 76ers game while in town.

Now sitting 7-5 on the early season, Oxford has three more games before the start of their regional play. Circled on their calendar is Friday’s cross-town rivalry game and then a Jan. 3 rematch with non-division Desoto Central, a team they lost by 64-63 in overtime to in November.