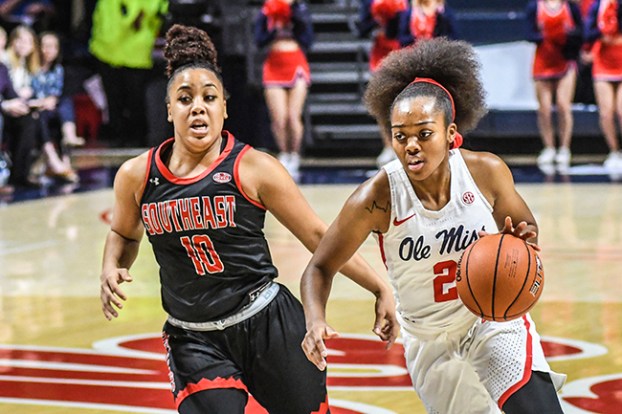 The Ole Miss women’s basketball team could not find an edge against a consistent Southeast Missouri squad, falling 70-53 at The Pavilion on Saturday evening.

The Rebels (5-5) trailed for most of the game, and despite chipping away at the Redhawk lead at times, they could not overcome a 16-0 run by SEMO (6-2) to begin the second half. The Redhawks nailed seven of their first nine shots to open the third quarter, a momentum swing that turned the tide of the game in their favor for good.

Southeast Missouri shot 44.9 percent on the evening and limited the Rebel offense, forcing 22 turnovers that ended up as 20 SEMO points and holding Ole Miss to just 45 shot attempts. SEMO entered the contest as the No. 10 rebounding unit in the NCAA and left with a 37-30 victory on the boards, including a 14-5 edge on the offensive glass.

“I tried to figure out a way to keep a high-powered offensive team and a veteran team like Southeast Missouri at bay, and we struggled at that,” said Ole Miss head coach Yolett McPhee-McCuin. “I thought we had a lot of opportunities to get something going, but this group is still trying to figure out who they are and who they want to be as a team. Right now, we are really struggling any time we have any adversity. I thought Southeast Missouri was the better team.”

Ole Miss was able to limit SEMO to a 6-of-19 mark from beyond the arc, but Shephard was 4-of-8 from distance to pace the Redhawks. Shephard entered the contest ranked ninth in the NCAA and atop the OVC in threes per game.

“Every game is different, but we were supposed to deny,” McPhee-McCuin said. “We were not supposed to ever lose sight of (Shephard). We weren’t supposed to give her any threes. She went 50 percent from three.”

The momentum-shifting Redhawk run to open the second half gave SEMO a 51-25 lead at the 5:22 mark of the third quarter, but an Ole Miss timeout helped the Rebels settle in for a bit, setting up what amounted to a 19-6 run across the remainder of the third and the beginning stretches of the fourth quarter. Deja Cage started that run with a designed three-pointer from the corner – one of four on the night for the junior who scored 13 points.

Junior Valerie Nesbitt chipped in another solid effort as well, leading the Rebels with 15 points to go along with six rebounds, four steals and three assists. This marks the fifth game with at least four steals for Nesbitt, who is on pace to crack the top-five list for single-season steals at Ole Miss by season’s end. Freshman Jayla Alexander had 11 points, her fourth career double-digit game.

“I thought there were some moments tonight where we did sit down and showed some grit, but we have to be able to put that together for longer stretches of time, and right now we are not doing that,” McPhee-McCuin said.

Ole Miss has a quick turnaround as it will host Georgia Southern for the 17th annual Kids Day game at The Pavilion on Monday morning (Dec. 16) at 11 a.m. CT inside The Pavilion.

After struggling on the offensive end for a good portion of the past month, the Ole Miss basketball team has... read more