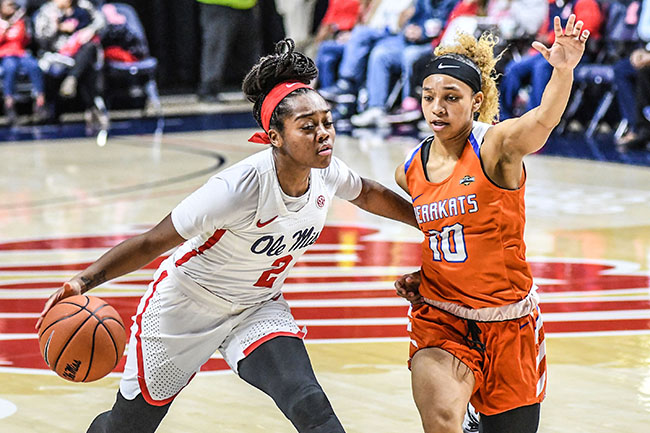 With the exception of one recent blowout at Texas Tech, all the nine losses have been close.

It’s a Rebel team that’s inexperienced and still learning how to win, but they’re also a team adjusting on-the-fly to the loss of one of their best players for the entire season.

Freshman forward Sarah Dumitrescu tore her ACL on Nov. 26 against Sam Houston State. The Rebels have played just three games without her so far, including two power-five losses to Texas Tech and Pittsburgh. Simply put, Ole Miss head coach Yolett McPhee-McCuin wasn’t expecting it to take the girls so long to adjust to the freshman’s loss, but they’re coming along.

“It was an emotional deal for us, honestly. I thought that our players would be able to just get over it, but it took a toll on them, without being intentional,” McPhee-McCuin said. “It’s just been a lot. Then you look at finals, that’s a stressful time for athletes anyways. All of that on top of it, it’s great for finals to be almost over. It’ll be great for us to just be able to focus on basketball for a little while and start to understand life without Sarah.”

The team went straight from the game to see the freshman at the hospital. They stayed there until about 1 a.m. and had to get on a play at 5 a.m. the next morning to leave for a tournament in Daytona Beach. After two games in Daytona Beach, they came home and played just days later on the road at Texas Tech.

They never really got a chance to process and adjust to the loss of Dumitrescu. Now, with a 10-day break between Texas Tech and Southeast Missouri at home on Saturday, the team is finally getting used to their new reality.

“The time off is a great thing. We have just eight players now. So it’s a great thing for us. Our kids were exhausted from the trip in Daytona and then going to Texas Tech,” McPhee-McCuin said. “These days off were awesome for us to get back and clean up some stuff we wanted to work on.”

A big part of the early season struggles comes from lack of experience. This team has just one senior. The juniors on the team are transfers that have never really played at the SEC level, so in a way, they’re freshmen, too.

Ole Miss also needs to get more offensively from sophomore guard Mimi Reid moving forward. Reid, who started as a true freshman a season ago, is averaging just 4.2 points per game this season despite playing over 30 minutes. A big part of her struggles is an inability to hit open three pointers, where she’s made just four all season.

“Mimi has to knock down the shots that she gets,” McPhee-McCuin said. “I’ve talked to her. She just has to be able to knock down open shots, because she’s not being guarded. One of the easiest shots besides a free throw or a layup is an open three. But that’s not going to work until she spends time in the gym working on it. Now that exams are over, she’ll have an opportunity to get back in there more.”

The women have just four games remaining, all at home, until the start of SEC play on Jan. 2. They need to find their identity quickly, and that all starts Saturday Dec. 14 at 5 p.m. against Southeast Missouri.

Khadim Sy getting more ‘comfortable’ with each Rebel game