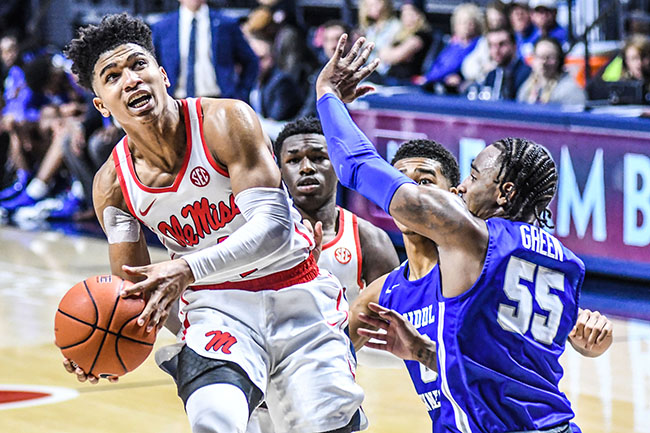 After struggling on the offensive end for a good portion of the past month, the Ole Miss basketball team has gotten back into a groove recently on offense.

In large part, it’s been sparked by the play of senior guard Breein Tyree.

Led by Tyree’s career high 34 point outing, Ole Miss controlled Middle Tennessee from start to finish on Saturday afternoon. The Rebels, with their 82-64 win advance to 7-3 in the non-conference slate.

At times, specifically early in the first half when Ole Miss built up an early 19-point lead, the ball moved better than it had been all year for Ole Miss. Entry passes to Khadim Sy were kicked to an open shooter, then swung around to a more open shooter on multiple occasions. More than a handful of times, Tyree was the beneficiary of those third-pass three-point attempts.

“The last three games, even Butler, our assists to baskets made has gotten a lot better,” head coach Kermit Davis said. “The ball is moving and we’re scoring in the 80s. That’s why. It’s been a big improvement.”

Sometimes, basketball can look really simple when you’re making shots. That’s what Tyree’s first half was like. He made eight of 12 shots in the frame, including seven of eight from long range. By halftime, those 25 points were only six shy of his career high of 31.

Middle Tennessee came out hot to start the second half, with two consecutive three-pointers to cut the Rebel lead to 11 for the first time since there were 11 minutes left in the first half. The quick run sparked a Kermit Davis timeout just 1:12 into the second half. The Ole Miss lead would get cut to as little as ten before the Rebels went on a handful of runs accumulating to one, large 23-9 run to extend the lead to a more comfortable margin. With a handful of key starters leaving the game late, they would win 82-64.

Tyree finished the day with career highs in both points, 34, and made three pointers, eight. His prior career highs sat at 31 points and 5 made three-pointers. However, as impressive as his shooting display was, he was still doing what he could to help out his guys.

“All week I was kind of shooting like that,” Tyree said. “You just kind of keep it going, prepare for the game like I was practicing. … We’re just making the right plays. It’s just moving the ball, moving the ball. If there’s an open shot, there’s a better shot.”

Simply put, junior guard Devontae Shuler has been struggling. Prior to Saturday, he was hitting just 26 percent of his shots over the prior five games. At one point, midway through the second half, Tyree had what appeared to be a breakaway layup that would’ve broken his career high at that time. Instead, he passed it ahead to his struggling teammate Shuler for an and-one layup, which he converted.

Just over one minute later, it was Shuler setting up Tyree with an assist on the three-pointer that would push Tyree to his career high. All-in-all, it was a relatively balanced scoring afternoon for the Rebels. In addition to Tyree’s big day, four other Rebels reached double figures, including freshman Austin Crowley, who also set a career high with 11 points.

“(Crowley has) probably got the most potential on the team, athletically,” Tyree said. “He’s got the build already. If he could just grow into his body a bit and play like that every night, he will be a key player for us.”

The Rebels don’t return the court again until Saturday Dec. 21, a game at the Mississippi Coliseum in Jackson against Southeastern Louisiana.