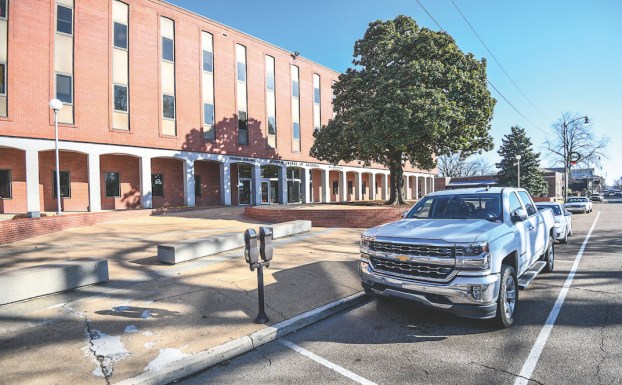 Vehicles are parked in some of the eight spaces along Jackson Avenue that are located in front of the Federal Building, in Oxford, Miss. on Wednesday, December 18, 2019. (Bruce Newman, Oxford Eagle via AP)

The City of Oxford is going to wait before making a decision on giving the U.S. Marshals eight parking spaces in front of the U.S. Courthouse on Jackson Avenue East.

Following a 23-minute discussion on the matter, the Board of Aldermen decided to put the issue on hold until the spring, citing their previous decision to not make any changes regarding parking in the Downtown Square area until at least six months after the new parking ordinances took effect and downtown garage opened.

The request for the parking spaces was made by Danny McKittrick on behalf of the U.S. Marshals. McKittrick was in attendance at Tuesday’s Board meeting, along with Chief Judge Sharion Aycock and Clerk of the Court David Crews.

According to the U.S. Marshals, the request for the spaces, which are located directly in front of the federal building, is due to safety concerns. The time frame requested to use the spaces was from 7 a.m. to 6 p.m. on weekdays.

“The request we’re making is strictly based on security issues at the federal courthouse,” McKittrick told the Board. “The reason we’re making the request is for an additional blast protection from the street. We’re not near in compliance with the setback (requirement). It was when the federal building was built and prior to 9-11, but we’re not there anymore.”

Those using the eight spaces, according to the Marshals’ request, would be marked law enforcement vehicles only.

Oxford Mayor Robyn Tannehill met with McKittrick, Aycock and Crews on Nov. 21. Tannehill stated she informed the Board of those talks and all other pertinent information, but had some reservations on approving eight paid spaces to be given away for 11 hours a day during the week.

Metered parking is not enforced until 10 a.m., but Tannehill noted she had pulled the revenue sheets for those specific spots. Previously, the spots were bringing in about $12,000 per year as of September this year and as of December they were now bringing in $15,000 for the year.

The St. Peter’s Episcopal Church, as well as local businesses located directly across from the federal building, had reached out to City Hall to express their concerns over losing those spots and affecting their business.

“With revenues, as we have discussed, that’s a concern for (the Board),” Tannehill said. “Right now, what our parking is generating is not going to pay the bond for that parking garage. So, to look at giving up the potential of $43,000 a year, which is potential revenue to be generated there, is difficult.”

Alderman John Morgan asked McKittrick about the timing of the request, questioning why the need for extra safety measures was only now a priority, despite attacks on other federal government buildings throughout the country taking place over the past couple decades.

In 1995, for example, there were concrete barriers and blockades installed in front of the building in response to the Oklahoma City bombing.

McKittrick and Aycock insisted their request was only about the safety of the federal building and not parking-related. They reiterated importance of keeping the people who work inside the building safe in the event of an attack, such as a car bomb or anything else, and that they “check for bombs” every day. The FBI building is currently closed due to mold issues, but McKittrick insisted their request was completely separate from the FBI’s current situation.

Alderman Rick Addy mentioned the Board’s decision to wait for half a year before anything parking-related was discussed or potentially changed with the new parking ordinance. He told McKittrick and Aycock that there are still four months of that time frame remaining and they could come back to discuss the matter in late April.

“Respectfully, I would say it’s different than just speaking about businesses and I know that’s your business,” Aycock said. “But, you’re dealing with a federal courthouse and you’re lucky in the way it is integrated with this community and it’s part of downtown. Perception is part of this. We are only concerned about the safety of the people in that courthouse. If they blow it up at midnight, no one’s in there, but if they see eight marked cars out there, it could be a real deterrent. …We’ll all remember this evening if something happens.”

Toward the end of the discussion, the idea of the federal government potentially reimbursing the City for the money lost by giving up those parking spots for a bulk of the weekdays was presented. Crews and McKittrick said they could not promise reimbursement, but they could pass that idea up the chain to their superiors, and requested some more detailed information regarding the revenue made and the hours the majority of it is made.

During their board meeting on Monday, the Oxford School District acknowledged academic excellence from dozens of its students. Forty-eight students... read more