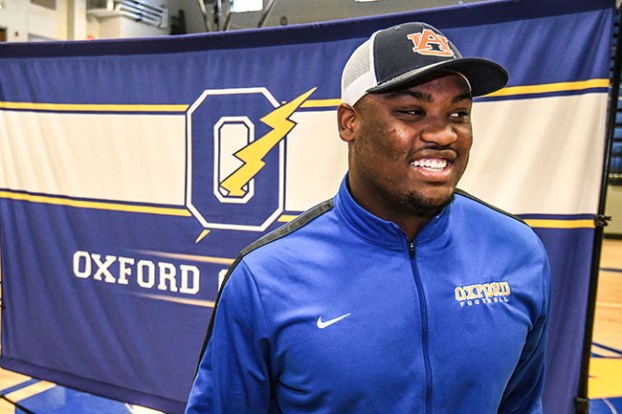 Oxford’s own JJ Pegues is headed to Auburn University.

The four-star athlete recruit made his college decision on Wednesday morning, in front of a crowd at the Oxford High School gymnasium. With three hats lined up in a row, Pegues went to his right. He chose Auburn over offers from Alabama and his hometown school, Ole Miss.

“I just felt so comfortable there. I knew they were in the lead for a while,” Pegues said of Auburn. “It’s been hard (not picking the hometown team), but I know at the end of the day they want me to succeed in life – not just football, but life in general.”

Pegues said he’s had his mind made up on Auburn for a few months now. All that said, he never told anyone, not even his parents, until Wednesday morning.

A big reason he settled with the Tigers is because of how the team will use him, Pegues said. He is listed on recruiting databases as an “athlete,” versus being labeled a specific position. He’s played some defensive line, but really, he wants to be a tight end. That was something that was relatively non-negotiable with Pegues.

Gus Malzahn and Pegues spoke yesterday, his final of many assurances that the high school tight end will play that same position in his offense beginning next year.

“It’s just that with the other schools, I wanted to find out for sure where they wanted me to play,” Pegues said. “(Malzahn) said he was going to keep it simple for me, just keep my role how it is now in high school right now. That’s great.”

His role on the Oxford team that won the 2019 MHSAA 6A State Title was relatively ambiguous. Sure, Pegues was a tight end and he’ll be a tight end at the next level with the Tigers. That said, he rushed for more yards this season, 623, than he received, 607. Totaling 18 touchdowns on the season, Pegues’ 6-foot-3, 285-pound frame makes him a great blocker and critical goal line ball-carrier.

Over the course of his entire Oxford career, Pegues amassed over 2,500 yards from scrimmage and 41 total touchdowns. Through all the accolades, culminating in the MHSAA 6A Championship Game MVP award, his head coach will always first marvel about the type of kid JJ Pegues has been for the Oxford football program throughout his four years of varsity football.

“I told him this morning. All of this started for him two or three years ago,” Oxford head coach Chris Cutcliffe said. “He was 15 years old, and a lot of people would let this go to their head and change who they are as a person. JJ hasn’t changed one bit. He’s such a fantastic young man and he’s such a great leader for our team.”

As Pegues said in his announcement, he’ll now be spending the next three to four years of his life with the Tigers down in Auburn, making two return trips to Oxford for games against Ole Miss.

In true Oxford style, the 2019 Oxford High School football team showed up to the City of Oxford’s celebration of... read more