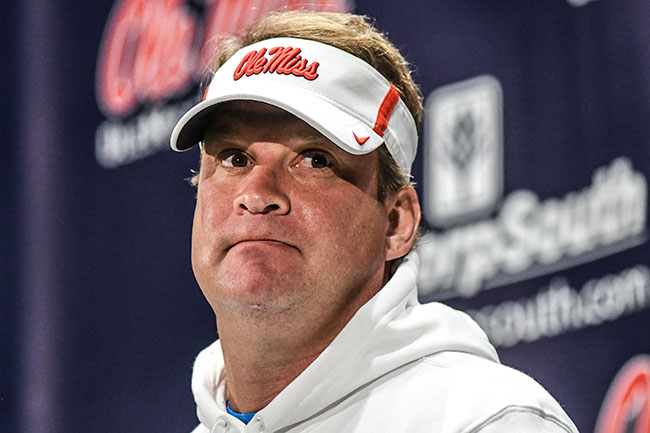 Ole Miss head coach Lane Kiffin discussed the challenges of missing out on the spring to get to know his players and building relationships heading into his first season. (Bruce Newman, Oxford Eagle)

Lane Kiffin got to make his first real mark on the Ole Miss football program on Wednesday.

Eleven future Rebels turned commitments into official national letters of intent at the start of the early National Signing Day window on Wednesday, inking themselves to be the first portion of the Rebels’ 2020 recruiting class.

“This early signing period, to me, this is kind of like halftime right now,” Kiffin said. “Last time being at this level as a head coach, we didn’t have this (window). … We signed some good players today that we’re excited about, but we’ve only been here a week. But just like signing our staff, we say we’re going to work fast but we’re going to work smart.”

All 11 players Ole Miss got on paper Wednesday are rated as three-stars by the 247Sports Composite ratings, a method that accumulates ratings from a handful of different agencies.

The letters of intent came in during an early barrage, with Ole Miss having received five of the 11 prior to 8 a.m. on Wednesday. The remaining letters trickled in all the way up till about 7:30 p.m., with junior college defensive back Lakevias Daniel’s commitment.

While the 11 commitments came from six different states, a big grouping of the most key ones came from right here in Mississippi. In addition to Eli Acker, the top offensive lineman in the state, the Rebels landed five other recruits from the state of Mississippi: Jakivuan Brown, Kentrel Bullock, Daylen Gill, Lakevias Daniel and Austin Keys.

Brown, the top linebacker in the state, has been a player who never wavered on his signing and commitment with the Rebels. He chose Ole Miss over Auburn, Mississippi State and others and will add to the versatile Ole Miss linebacking core.

“We’re going to sign the best players to win games,” Kiffin said, in regards to signing players from the state. “When if comes down to players that are equal, we’ll choose the in-state player. But we’re not going to sit here and say we’re only going to sign all Mississippi kids. We have a lot of great players that want to come here. Really, national programs that win for a long period of time, they recruit nationally.”

Bullock, the state’s top running back, announced Tuesday via Twitter that he would be coming to Ole Miss after a prior decommitment. He’ll join a running back room that, with Scottie Phillips’ graduation, is entirely Jerrion Ealy’s to dominate. However, there will be some other non-Ealy touches to hand out.

Among others in the class that stand out are Derek Bermudez, a safety from Florida, and Kade Renfro, a quarterback from Texas. Bermudez, who decommitted from Florida State in November, visited Ole Miss just last week. He’ll join a defensive backs room and coaching staff that’s unafraid to play young  guys, giving two freshmen starting time last year.

Renfro stands out as Kiffin’s first hand-selected quarterback. He’ll join a very crowded room containing returning experience in John Rhys Plumlee and Matt Corral, as well as two players who redshirted a year ago in Grant Tisdale and Kinkead Dent. It’s unlikely that he’d see any playing time in 2020, but he’s the quarterback Kiffin wanted.

“Kade (Renfro) is a really good player with a big upside,” Kiffin said. “At that position especially, just like all of them, we’re starting from scratch. He’s got a real big upside and someone who hasn’t played a bunch of football. He’s still maturing from a growth standpoint, growing into his body. But he’s really competitive and has great touch on the ball. I think he could have a great future.”

Outside of the players the Rebels landed, two key four-star players from the state that they lost stand out. Both JJ Pegues, a four-star athlete from Oxford, and Josaih Hayes, a four-star defensive lineman from Horn Lake, spurned Ole Miss for other SEC schools with Auburn and Kentucky, respectively.

Hayes had been unofficially committed to Ole Miss for quite some time, decommitting in October. He was on campus in Oxford last weekend for an official visit, but in the end chose to go to Kentucky.

Four of the 11, Bermudez, Gill, Renfro and Keys, will be mid-year enrollees and with the team for spring practices.

With the 11 signees in the early window, the Ole Miss class ranks No. 40 in the nation by the same 247Sports Composite score. They rank No. 11 in the SEC, ahead of just Vanderbilt, Missouri and Arkansas.

The Rebels still have standing commitments from seven other players, all three-star rated, who will likely sign when the signing window re-opens in February. Additionally, there are a handful of other unsigned players, such as four-star running back Henry Parrish from Florida, who recently announced they had received Ole Miss offers and now will be signing in February window.