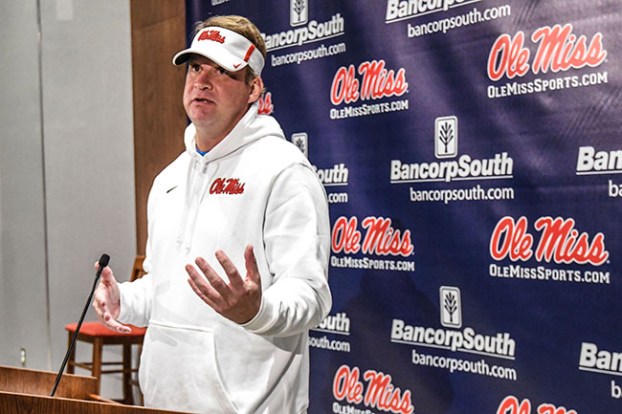 COLUMN: Preaching patience: A slow start to recruiting is okay for Lane Kiffin

In total, the new Ole Miss staff signed 12 players for a class rated No. 38 in the nation and No. 11 among SEC schools. It’s not exactly the numbers you’d like to see if you’re an Ole Miss fan, but for now, it’s perfectly fine.

“We’ve only been here a week. Just like our staff, we said we were going to work fast, but we’re also going to work smart,” Kiffin said. “We only had one weekend, and some kids already had that weekend filled, so we weren’t able to get to everybody. … Just like you can’t win the game in the first or second quarter, you can’t win recruiting yet. We’ll have a lot of work to do.”

Kiffin could have rushed to put together a staff and rushed to just sign the largest number of recruits possible in the early signing window. It’s something a lot of schools do, sometimes unintentionally or without knowing any better.

Fans like seeing the overarching numbers. The four-stars, and five-stars are sexy, but end the end they mean nothing if they’re not the players right for your program. It’s something Kiffin preached multiple times at his press conference on Wednesday afternoon.

“Doing this a long time now, I probably would’ve handled it differently 10 years ago, worried about where our rankings were,” Kiffin said on Wednesday. “The rankings today and all of that stuff doesn’t matter anyway. This will be a really big January, and I think you’ll end up seeing some guys sign here that aren’t even on the radar right now.”

January was another thing Kiffin made sure to mention a few times.

He emphasized that there were some players who could have signed early, who wanted to sign early and whom he encouraged to wait until the February window.

As mentioned, that patience flows toward the new Rebels staff as well. Kiffin has already announced a few key hires, including offensive coordinator Jeff Lebby. The biggest unfilled position is at defensive coordinator, where Kiffin insists holdover Mike MacIntyre will be a prime candidate. But instead of rushing to fill that staff, Kiffin is yet again vying for the slow game.

“I think we’ve got a ways to go. We still need to figure out defensive coordinator. Mike MacIntyre is definitely one of those candidates,” Kiffin said. “When you figure out that, you can figure out the rest. I always try to hire the coordinators first, then interview the other guys, whether it is outside guys or guys who are here. Any guys who are still on staff will have the first chance to interview, and we’ll go from there.”

One really just has to look at recent Ole Miss history to understand the value of this patience. Hugh Freeze’s first recruiting class as head coach at Ole Miss ranked No. 48 in the nation. It came slowly, but he took his time and looked toward the long haul. Freeze’s next two classes ranked in the top 15 nationally.

You want a more positive spin? Kiffin is one of three new coaches in the SEC to this point, alongside Sam Pittman at Arkansas and Eli Drinkwitz at Missouri. All three had about the same amount of time to put together an early signing class. The Ole Miss class ranked ahead of both Arkansas and Missouri.

In the end, signing day is critically important. There’s no way to skirt that. All this said, rushing to fill one class is less valuable than taking your time and doing things right.