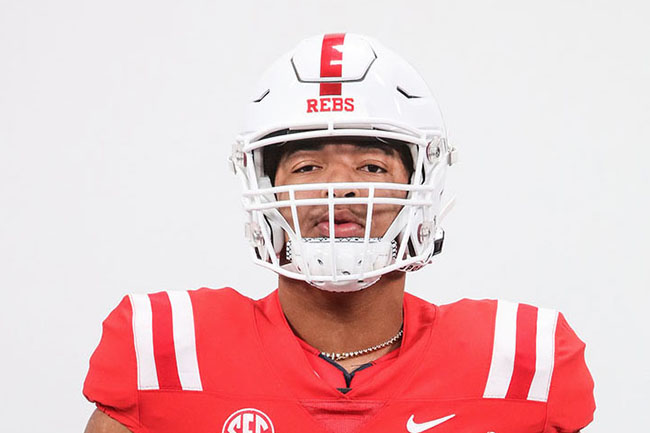 It’s easy to talk extensively about how Lane Kiffin and his new staff had very little time to turn around a Dec. 9 arrival in Oxford to a Dec. 18 signing day, but there’s a counter to that conversation.

Those high school seniors previously committed to play at Ole Miss in the 2020 recruiting class also had very little time to get to know their new head coach before signing.

Ole Miss signed 12 players in the early window on Wednesday. All of these players signed didn’t know Lane Kiffin before two weeks ago. For some of them, that part simply didn’t matter.

“I wanted to sign because my commitment was not about a person, it was about a program that’s on the rise,” said DeSanto Rollins, a three-star defensive tackle from Baton Rouge, La.

That thought of a program on the rise was a relatively common thread mentioned by the four signees the EAGLE spoke to in the days following signing day.

Some associated the rise to the program. Of the eight losses in 2019, five were one-score games. At many times throughout the season, it felt like the Rebels were right there, but simply couldn’t pull through.

Others associated the program on the rise concept with the new staffers, specifically Kiffin himself.

“Ole Miss was the best atmosphere in the world and they accepted me with open arms,” said DaMarcus Thomas, a three-star tight end signee from Alabama. “(Kiffin) is an amazing guy that’s ready to turn the program around.”

A few former Rebel commits decommitted after Matt Luke got fired. The move came as a surprise to many, especially after athletic director Keith Carter confirmed leading up to the Egg Bowl that he planned to move forward with Luke at the helm.

Some of those players were not able to be retained by Kiffin and his staff, such as Robbie Ashford. However, some they were able to bring back

Kentrel Bullock, the top-rated running back in the state of Mississippi, first committed to Ole Miss back in June. Earlier this month, after Luke’s firing, Bullock reopened his recruitment. However, following conversations with the new staff, Bullock was a Rebel again.

“It just felt like they loved on me every day. They made me feel home again. As I started getting closer to the staff, I just loved the environment,” Bullock said. “I want to be part of something special, because I know it’s about to change.”

Kiffin himself was honest about the process, saying he had started watching tape on potential recruits when he was on the plane to Oxford the day before he was introduced publicly as the new Ole Miss head coach. But as much as he could do himself, he turned to those who knew the players best.

“(Our assistants) know them better than me. Most of these kids, especially in the South, they’ve visited here 10 times, been to a million games and junior days and all that stuff,” Kiffin said. “They already knew about Ole Miss and a number of them wanted to come here. I didn’t really talk much about that. I talked more about what we’re planning on doing, whether it’s scheme or your position and how we coach that position or how we’ve coached it before and just kind of combine the two.”

During his post-signing day press conference on Wednesday, Kiffin described the early signing period as a “halftime,” saying he still has high hopes for those who will be brought in during the February period.

That next wave of recruits will be chosen much more based on a relationship with Kiffin and his new Ole Miss staff. For these 12 early signees, it was about faith in a program and a place in Oxford, about a program on the rise with Kiffin at the helm.

Charger hoops get pair of key wins at Calhoun…