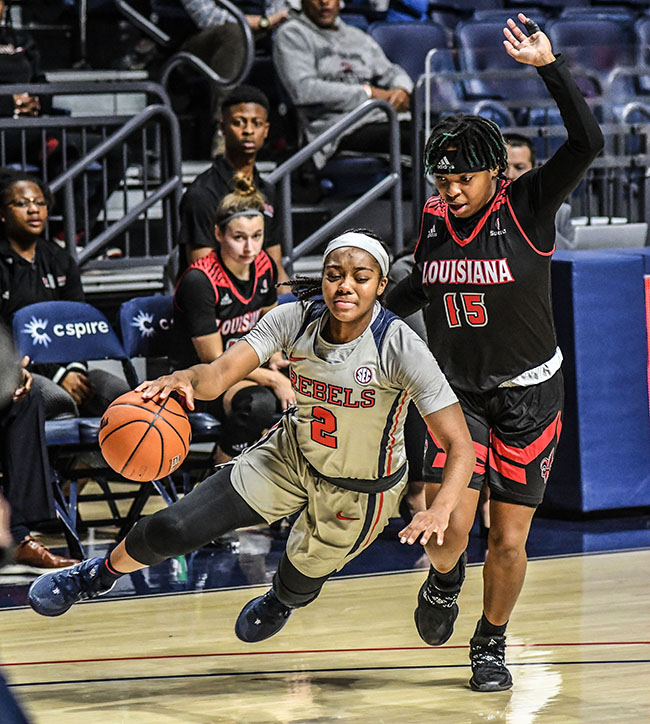 OXFORD, Miss. – Ole Miss shot less than 30 percent from the field in a defensive struggle against Louisiana-Lafayette and the Ragin’ Cajuns came away with the victory as the Rebels fell, 53-42, at The Pavilion at Ole Miss on Friday night.

Runs and scoring droughts were bountiful on both sides, but the Rebels (6-6) were never able to overcome an 11-point deficit following the first quarter despite chipping away at the Louisiana-Lafayette (7-3) lead effectively in the second half. Neither team shot particularly well, shooting a combined 30-of-102 (.294) from the field, and although the Rebels had a 5-1 advantage in three-pointers thanks to a solid night from senior Torri Lewis, the Ragin’ Cajuns made Ole Miss pay on the free throw line, draining 20-of-24 from the charity stripe.

Louisiana-Lafayette opened the game with a strong first quarter, stifling the Rebels from the field for six minutes while closing the quarter on a 12-3 run to take a 20-9 lead, shooting 50 percent from the floor in the process. The Ragin’ Cajuns got out to their largest lead of the game at 15 points by the 7:23 mark of the second quarter, but two quick buckets by Valerie Nesbitt (six points, four rebounds, four assists, two steals) and Deja Cage (seven points, three rebounds, two steals) gave Ole Miss the spark it needed as it held Louisiana-Lafayette scoreless for nearly six minutes in the second quarter.

Ole Miss ripped off a 9-0 run in that stretch, which was helped by a Rebel defense that turned seven Louisiana-Lafayette turnovers into nine points in the second quarter alone. Freshman Jayla Alexander (six points, five rebounds, two steals) capped the run off with a big three-pointer with 2:09 to go in the half to make it a six-point game, but the Ragin’ Cajuns went on a 6-2 run to close the half that kept their lead at 10 points (30-20).

The Rebel defense did not yield to start the third quarter, holding Louisiana scoreless for the first 5:18 of the period, and back-to-back treys from Lewis made it a six-point game heading into the fourth quarter.

The drought bug hit the Rebels back in the fourth, though, as they were held scoreless for separate periods of 4:03 and 2:59 in the final frame as the Ragin’ Cajuns held on for the win. Another Lewis three followed quickly by a Nesbitt layup at 4:00 cut the lead to five, but that would be as close as the Rebels would get the remainder of the game.

Lewis led the Rebels with 11 points on a trio of three-pointers, her 29th career game with multiple threes. The Ragin’ Cajuns, meanwhile, were led by Ty’Reona Doucet, who had 16 points and 7 rebounds.

Following a holiday break, the Rebels return to The Pavilion at Ole Miss on Sat., Dec. 28, when they host Alabama State at 2 p.m. CT.