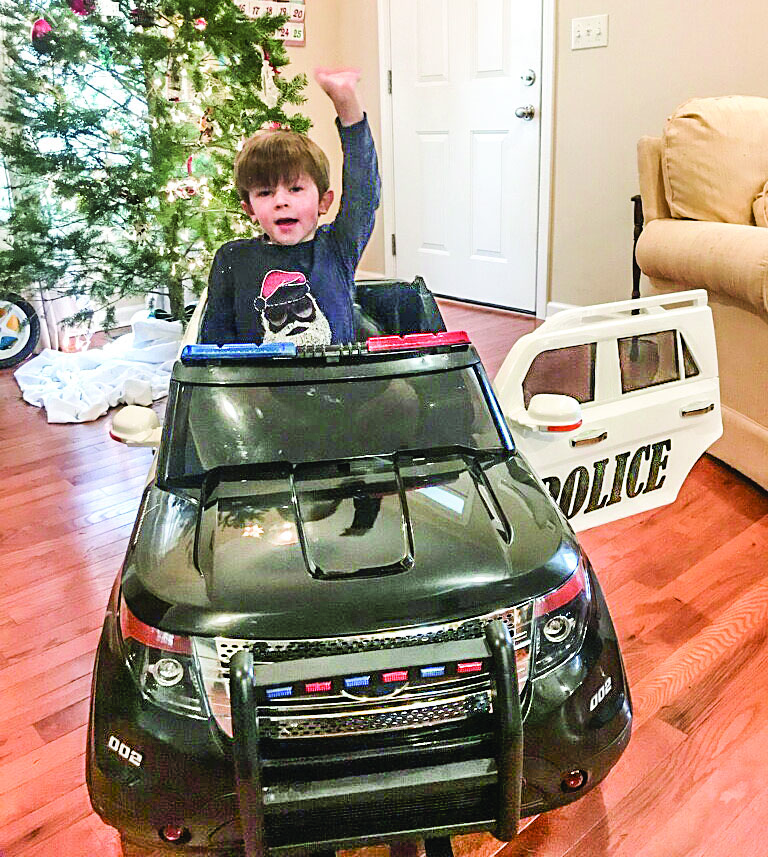 Bailey Stacey sits in his police car that he rescued from the Grinch last week. Bailey helped the Oxford Police Department in saving Christmas from the Grinch.

Christmas was in doubt last week, when the Grinch decided to descend from Thacker Mountain and steal all the presents in Oxford.

One of the many Oxford children who were going to wake up to a blue Christmas was Bailey Stacey. What the Grinch was unaware of was that the three-year-old was becoming a young police detective whose skills were about to be called upon by the Oxford Police Department to solve this Christmas caper.

Bailey lived next door to OPD officer Rachel Ratcliffe and the two formed a unique bond.

“He started seeing my police car out front, and then he just came over and introduced himself and asked about police work,” Ratcliffe said. “I let him climb in there, he turned on the lights and he turned on the siren. He was just always asking how I was doing and if I saved anyone that day.”

One day Bailey asked to see the police department and Ratcliffe obliged, giving him a tour.

The bond went beyond a young child curious about ins and outs of a police officer and their car and equipment. When Bailey’s house was flooded and his family was in need of help, Ratcliffe allowed them to stay with her while his parents searched for a new home.

The Staceys have only lived in Oxford since the spring, moving from Jackson in March. The friendship between Bailey and Ratcliffe meant a lot to not only him, but to his parents.

“Bailey was always real interested in visiting with Rachel a lot and Rachel was just a great neighbor,” said Zack Stacey, Bailey’s father. “She would get off her shift and you could tell she was tired, but she would always make time for Bailey and let him play with her car. … She was always kind to our family when we lived next door and continues to be.”

Knowing Bailey and his family had been through some tough times in recent months, Ratcliffe wanted to do something special and give Bailey an experience he would not forget.

With that in mind, the plan was hatched: Bailey was going to save Christmas for Oxford.

Seeking the help of her best friend on force, officer in charge of the housing unit Renika Franks and Corporal Blake Horton, Ratcliffe put together a morning where Bailey was going to put his police knowledge to work and track down the green menace. They set out on the crime-solving scavenger hunt immediately after completing a night shift.

“I think I had more fun than Bailey did,” Franks said. “I was like, excited. I had the job to go set up everything before Bailey got there. My job was to stay ahead of them.”

The morning started with Bailey going to the Oxford and Lafayette County library, where the first clue was discovered along with a letter signed by “G.” Bailey managed to figured out the clue, sending him to Avent Park with the OPD in tow.

Once at Avent Park, the second clue was discovered with a photo of the creature whose heart was three sizes too small and a hint that he was set to make his big move at City Hall.

Bailey is aware of who the Grinch is, and of the famous Dr. Seuss tale, which ends with the Grinch becoming good and returning all the presents back to the residents of Whoville.

“We have started watching ‘How the Grinch Stole Christmas’ and he was asking in the car ride, ‘Is the Grinch nice yet or is he still mean?'” Stacey said. “We had told him, ‘We think he’s nice now. We think his heart’s grown.’ So I think he was a little less nervous about it when he saw him.”

Arriving at City Hall, the case was set to be closed with the help of Oxford Mayor Robyn Tannehill and OPD Chief Jeff McCutchen awaiting Bailey’s arrival. Inside the mayor’s office stood the Grinch himself, played by Horton, who was caught red-handed by Bailey stuffing presents in his sack.

Despite Bailey being excited by seeing the Grinch in person, he quickly got back to the task at hand and captured the green thief and handed him over to the OPD, saving Christmas for all the children of Oxford.

“When (Ratcliffe) asked me to do it, I told her I was 100 percent on board,” Horton said. “I got a lump in my throat when that little boy walked in. It was special to see that little boy’s face.”

What was also stowed away by the Grinch was Bailey’s present left by Santa; a brand new power wheels car. This car was no ordinary car, but an official police vehicle that Bailey could use to patrol his home and his street. The car bore a resemblance to Ratcliffe’s patrol SUV, which made it an even more special present.

Ratcliffe gave Santa an assist by finding the Power Wheels car herself online. Bailey’s mother wrote a letter to all three, thanking them for what that meant to her son.

“Some of the friendships we’ve built through the small group at church and Rachel, my wife was saying the other day that this really feels like home,” Stacey said. “It was just exciting seeing the look of joy and excitement on (Bailey’s) face. To get to see him do that with the police officers and feel like he was a policeman, it’s hard to describe the way the felt as a parent watching my son just enjoy doing something like that.”

Since capturing the Grinch and saving Christmas, Bailey has woken up every morning, running to make sure his patrol car is still safe and secure.

You can watch Bailey’s adventure below in a video the Oxford Police Department released.