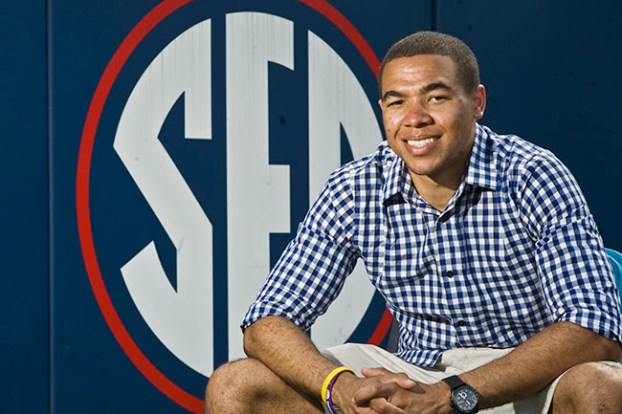 Edward Aschoff, in Oxford, Miss. on Wednesday, May 2, 2012, is a reporter for espn.com. (Bruce Newman, Oxford Eagle)

Edward Aschoff, an ESPN college football reporter and Oxford High School graduate, passed away on Tuesday after a fight with pneumonia. Aschoff was 34 years old.

“We are very sorry to have to share the devastating news of the tragic passing of friend and ESPN colleague Edward Aschoff,” ESPN said in a statement. “He died earlier today, his 34th birthday. Our thoughts are with his loved ones, including his fiancée, Katy.”

Most recently, Aschoff was based on the west coast, covering college football for ESPN out of Los Angeles. He’s appeared on all ESPN platforms, both digitally and on television ranging from SportsCenter and SEC Network and on ESPN Radio.

“Ed was one of the smartest, brightest reporters I’ve ever had the pleasure of working with,” ESPN executive editor Lauren Reynolds said in a statement to ESPN. “Watching him grow from our co-SEC reporter with Chris Low to a multiplatform national reporter was a treat. For as good of a reporter Ed was, he was an even better person. He always put people first – those whose stories he told, and those who had the honor of working alongside him.

Aschoff graduated from OHS in 2004, where he played soccer. He credited his start of sports journalism to his time as a Charger. He later graduated from the University of Florida in 2008. He worked first for The Gainesville Sun, covering the Florida Gators, before joining ESPN in 2011.

Edward Aschoff is the only son of the late Peter and Patricia Edwards Aschoff. Peter Aschoff passed in 2002 and taught in the anthropology department at the University of Mississippi. Patricia Aschoff, who passed in 2010, worked as a special-education teacher and advocate for domestic violence victims.

Since his passing, dozens of colleagues and friends have reached out via social media with positive support, many with similar messages referring to him as a “bright light” or “joyful spirit.”

This is devastating. Ed was such a bright light in everything he did. ❤️?? to his family. https://t.co/g2kUBS6uQB

Destroyed to learn of Ed Aschoff’s passing. I loved his joyful spirit, his stubborn opinions and his affection for VERY random teams.

Will never forget him wearing a Gordon Bombay sweater to a Preds-Ducks game in 2017.

This is awful. The world was a better place with Ed in it. pic.twitter.com/U2oZZFFnv5

Ed was pure sunshine and I don’t know anyone who loved his people harder. I’m devastated. https://t.co/w3jkIjbwbF

As the year, and the decade, closes, everyone inherently takes time around the holiday season to reflect on the best,... read more