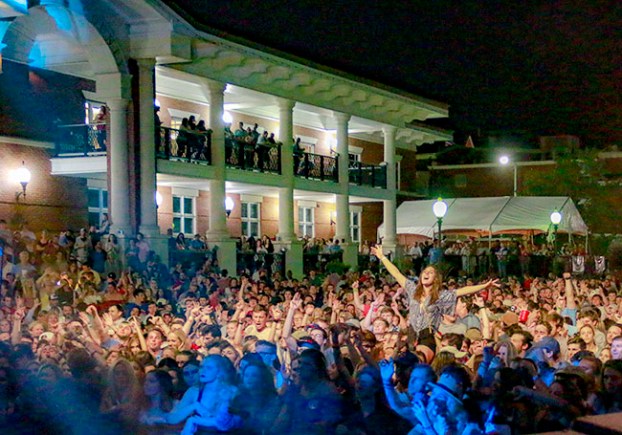 The festival's headliners, Cold War Kids, make the final performance of the 2018 Double Decker Arts Festival held on the Square in Oxford, Miss., Saturday, April 28, 2018. For a second straight year the festival will not be held, due to the COVID-19 pandemic and ongoing restrictions. (Chi Kalu, Oxford Eagle)

The 25th Annual Double Decker Arts Festival is considered one of the must-see events of 2020 in the Southeast, according to the Southeast Tourism Society.

Named one of the STS Top 20 Events in the Southeast for April 2020, the annual festival is expected to be its biggest yet to celebrate the milestone. The society has highlighted programs around the southeast since 1985.

“We are honored to be selected by Southeast Tourism Society as a Top 20 event,” said Kinney Ferris, executive director of Visit Oxford. “Our office is heavily involved with STS and understands the value of being noticed by this organization.”

Travel industry experts select 20 events per month, and STS publicizes the list throughout the country.

In 1994, the Double Decker Arts Festival was formed and was originally inspired by the Double Decker bus the City imported from England. The first festival featured only a handful of art and food vendors, with the main music stage created out of the bed of an old pickup truck. Now-Mayor of Oxford Robyn Tannehill helped organize the first festival in an attempt to help increase business for the city in what was considered a slow time.

Now, 25 years later, the festival features hundreds of vendors during its Saturday art festival and features musical acts over a two-day period. A race has been incorporated into the festival, offering a 5K, 10K and children’s fun run options.

The festival draws more than 60,000 people to the Downtown Square on a yearly basis.

“Double Decker Arts Festival will celebrate its 25th anniversary (in 2020) and we have worked to plan a special festival for our community and visitors,” said Lee Ann Stubbs, Double Decker Arts Festival coordinator. “Over the past 25 years the festival has grown tremendously and in this anniversary year we are thrilled to have been selected as a Top 20 Event by STS.”

Editor’s Note: This is the second of our four-part series, taking a look back at some of the most notable... read more