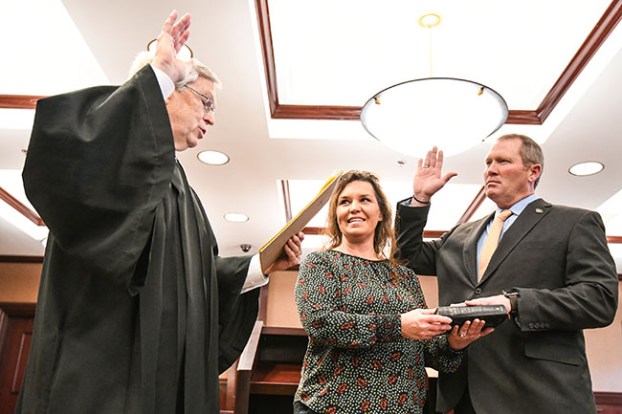 An East is officially sheriff of Lafayette County once more.

During a ceremony at the Lafayette County Chancery Court building on Dec. 27, Joey East was sworn in as the new permanent sheriff. Chancery Judge Lawrence Little presided over the ceremony, while East took the oath of office for the position his father, F.D. “Buddy” East held for over four decades.

East will begin his duties as sheriff on Jan. 1 instead of Jan. 6, due to interim sheriff John Hill resigning, effective Dec. 31.

In September 2018, East’s father passed away while still serving as Mississippi’s longest-tenured sheriff, and one of the longest tenured in the country. “Buddy” East became sheriff in 1972 and his passing created an opportunity for Joey to continue the family tradition. Joey had been serving as Oxford’s chief of police before stepping down in January during his bid for sheriff.

Interim police chief Jeff McCutchen was named the new permanent chief by the City of Oxford on Nov. 26 and will officially take over duties on Jan. 6.

There will be a ceremony on Dec. 30 by the City of Oxford to honor East’s time as police chief at the Oxford Conference Center.

New Lafayette County District 1 supervisor Brent Larson was also sworn into office during a ceremony at the Chancery building on Friday. Larson is replacing Kevin Frye, who did not seek re-election as he ran for the District 9 Mississippi Senate seat.

Editor’s Note: This is the second of our four-part series, taking a look back at some of the most notable... read more