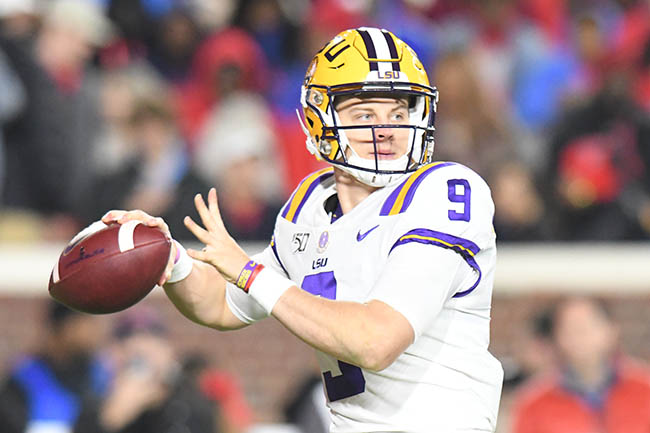 Bowl season is upon us. Beginning Friday, the SEC will appear in nine bowl games over the course of seven days, including LSU in the most important one – the opening round of the college football playoff on Saturday.

Over the next two days, the EAGLE will take a look at each of the bowl games the SEC appears in over the ensuing days and provide our picks for the games.

The EAGLE had high hopes for Texas A&M entering the 2019 season. However, Kellen Mond failed to make that second-year bump under Jimbo Fisher, and it seems like it might take Fisher a little more time to implement his will on the most profitable program in college football.

On the other side is a team known for an air raid passing game under Mike Gundy, that happens to be doing a very different thing in 2019. Oklahoma State (8-4) running back Chubba Hubbard leads the nation in rushing. Hubbard is averaging 161.3 yards per game (11 more than anyone else in the nation) the ground, to go along with 21 scores on the ground.

If picking Texas A&M, the counter to the up-and-down season is the strength of their competition. In addition to the always brutal SEC West schedule, the Aggies happen to play two teams in New Years Six bowls – Clemson and Georgia.

The second game played in bowl season by the SEC happens to just be one of two opening round games of the college football playoff.

Everyone reading this knows what LSU, specifically Joe Burrow and the Tiger offense has done in 2019. Thirteen wins before bowl season and a Heisman Trophy to show for it sort of speak for itself. The interesting thing about this game is in the way these two teams will attack each other.

Lincoln Riley and Joe Brady are going at it very different ways this year, largely in part of what each quarterback can and cannot do. However, the numbers are really unique, and sort of suggest that everything Oklahoma can do – at least in terms of efficiency – LSU can just do better. The Sooners rank No. 2 nationally in offense by S&P+ and No. 36 in defense. The Tigers just happen to be the only team in the nation to rank ahead of Oklahoma in offense and also come in 17 spots higher in defense.

LSU’s defense has been exploited by rushing quarterbacks – we all saw that with our very eyes as Ole Miss’ John Rhys Plumlee gashed the Tigers for 212 yards and four scores on the ground in Vaught-Hemingway Stadium back in November. If Oklahoma has a shot this weekend, it will need its own rushing quarterback (Jalen Hurts), to sustain drives and match score-for-score with LSU and Burrow.

LSU will likely beat Oklahoma and later win the National Championship, and there’s a good possibility that Heisman Trophy winner Joe Burrow will be drafted first overall come April. Ten is a big number, but the Tigers have answered every test over and over and over again in 2019.

Mississippi State had to switch starting quarterbacks four days before their bowl game because linebacker Willie Gay broke Garrett Shrader’s orbital bone during a practice fight on Thursday. Tommy Stevens will now be starting for State.

Nothing Mississippi State (6-6) did this year was largely impressive. A mid-season four-game losing streak was brought back to life with three late wins to get the Bulldogs bowl eligible. However, those three wins were against Arkansas, Abilene Christian and Ole Miss. It hasn’t been an impressive journey by any means.

That said, there’s a reason they’re favored over Louisville. The Cardinals (7-5) also have not been all that impressive, most recently losing 45-13 to Kentucky to end their regular season. It’s not exactly the way you want to roll into bowl season where you’ll be facing another SEC program.

Neither team ranks great in offense or defense by S&P+, with the State offense ranked No. 40 to Louisville’s No. 32. However, the numbers suggest the Bulldogs defense should have a big edge, ranked No. 99 in efficiency to the Cardinals’ No. 99. That would seem to give the edge to State. But when you have serious fights just days before a bowl game that literally break your quarterback’s face, you cannot be picked to win a bowl game.

The advanced metrics love Florida (10-2) this season. That probably has something to do with the fact that the Gators’ two losses have come at LSU and at a neutral site to Georgia, a 24-17 loss in which Florida nearly came back to win.

On the other hand, Virginia (8-4) has looked simply abominable at times this year. Sure, the Cavaliers came within one game of winning the ACC, but they also lost that game to Clemson 62-17. The fact that they nearly won the conference says more about the conference than the Virginia team.

Just looking at advanced numbers, Florida is the nation’s seventh most efficient team overall, ranking No. 15 in S&P offense and No. 7 in S&P defense. They’re simply a really good, really balanced football team. On the other hand, the Cavaliers are the nation’s No. 45 team, behind Tulane and Temple. Laying over two scores is a lot to do, but I’d rather just be on the side with the football team that’s simply better.