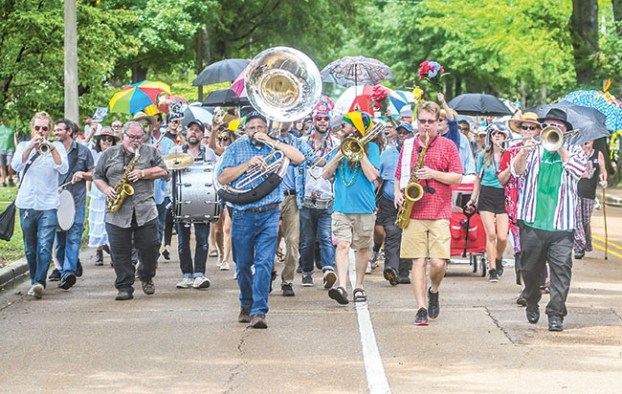 Editor’s Note: This is the third of our four-part series, taking a look back at some of the most notable stories of 2019.

As 2019 rolled on, Oxford continued to lose some of its beloved characters. None may have been more beloved than Ron “Ronzo” Shapiro. Shapiro himself handpicked the nickname ‘Ronzo,’ because it rhymed with gonzo journalism. It was a nickname that stuck for decades.

Shapiro passed away on Aug. 19 after a long battle with cancer and with him went a little bit of the spirit of Oxford. The owner of The Hoka and The Main Squeeze, Shapiro was a constant supporter of Oxford’s art community and could always been seen riding around town on his bike.

“To honor him, I guess we can all just try to be nicer and slow down a little. Try to encourage each other. Or, as he would say, ‘Don’t just do something, sit there,'” longtime friend Jim Dees wrote of Shapiro’s passing. “Thank you, Ronzo, my brother and mentor, for all the words, the wisdom and hideous clothing. And for doing half the laughing for 40 years. See you at the next stop – I think I’ll be able to spot you.”

Six days after Shapiro’s passing, local musicians decided to pay tribute to “Ronzo” in the only way they knew he would approve. On Aug. 25, the city’s first-ever second line took place, marching down North Lamar Boulevard to the Downtown Square where hundreds of people gathered in front of Proud Larry’s to celebrate their friend.

Two months to the day after the tragic death of Dominique Clayton, Oxford and the Ole Miss community was rocked once again by tragedy.

During a morning routine patrol around the Harmontown area near Sardis Lake on July 20, Lafayette County sheriff’s deputies discovered the body of Ally Kostial, a 21-year-old from St. Louis, Mo. who was a business administration major and entering her senior year at Ole Miss.

Days later, fellow student Brandon Theesfeld was arrested at a Memphis gas station and charged with the murder of Kostial. Theesfeld and Kostial were having an on-again-off-again relationship, but the nature of it at the time of her death is still not known. Kostial died from gunshot wounds to the abdominal area.

Theesfeld, a Fort Worth, Texas native, was ultimate charged with capital murder. He is currently awaiting trial and is still waiting to have a psychological evaluation at the Mississippi State Hospital in Pearl, per his attorney’s request.

In August, the University of Mississippi announced its plans to relocate the Confederate statue, which had been at the center of attention earlier in the year.

The move comes after nearly all University governing bodies approved resolutions, calling for the statue to be removed from its current location at the Lyceum Circle. In February, two pro-Confederate groups held a protest and rally, supporting the statue remaining where it stands.

“As we move toward this important change for our university, the university administration remains committed to abiding by the state rules and laws and IHL policies that govern all construction projects on our campus,” then-interim chancellor Larry Sparks said in a letter to University faculty, staff and students.

The plan is awaiting final approval by the Institutions of Higher Learning’s Board of Trustees, who will discuss the issue next year at a future board meeting.

In May, longtime alderman Ulysses “Coach” Howell passed away suddenly after suffering a massive stroke. A special election, due to state law, was called for early July.

Putting her name in the running was Kesha Howell-Atkinson, daughter of “Coach” Howell and a teacher in the Oxford School District. Howell-Atkinson ran against Arnold Pegues in the July 2 election and won the Ward IV alderman seat, replacing her father, who sat in the same chair on the Board of Aldermen for 26 years.

“I am humbled and I want to thank citizens of Ward IV for electing me as your next alderman,” Howell-Atkinson told the EAGLE. “I am also forever grateful that Ward IV saw fit to give me this opportunity to continue my father’s legacy of service.”

Oxford continued to experience tragedy when a Starkville girl passed away from injuries suffered in a plane crash at the Ole Miss golf course.

The incident occurred on July 6 at approximately 3:15 p.m. when Lake Little, 18, crashed her Cessna 172R airplane next to the 17th tee box. She was working on touch-and-go takeoffs at the University-Oxford Airport (UOX) after leaving from the Golden Triangle Regional Airport in Columbus around 2 p.m. Little sustained serious injuries which she later succumbed to at Regional One Medical Center in Memphis.

Little was set to be an incoming freshman at Mississippi State University a month later.

An Oxford icon hit a milestone this year when Square Books celebrated its 40th birthday in September.

The store, opened by former Oxford Mayor Richard Howorth in 1979, held several celebrations leading up to the big birthday. Southside Art Gallery ran an exhibition of all the book posters Howorth had accumulated over the four decades from promotional material for books. The Lyric also hosted a grand 40th anniversary party.

To commemorate the special year, Howorth opened the fourth store under the Square Books umbrella, Rare Square Books. The antique bookstore opened in the same space Square Books originally opened 40 years ago, above where Square Books, Jr. is now located.

“It’s always been challenging. It’s not any easier today than it was the day I opened,” Howorth said. “It’s a complicated business, but a really wonderful business because it’s interesting. … Oxford’s always been good about (embracing local businesses). Oxford had always been that way of a community of which the townspeople and the University are intertwined and it’s small enough, so everybody knows everybody. You support your fellow townspeople.”

The Town of Water Valley went into the record books this summer when it held the world’s largest watermelon-eating contest. The event coincided with the 50th annual Watermelon Carnival, which took place the first weekend in August.

Over 750 people participated in the watermelon eating contest, shattering the previous Guinness World Record of 259 people eating watermelon at the same time. The previous record was set in 2018 by the Town of Safety Harbor, Fla.

The number will not be made official until early 2020.

A single-car wreck on Highway 328 is under investigation by the Mississippi Highway Patrol. At approximately 4:23 p.m. on Oct.... read more