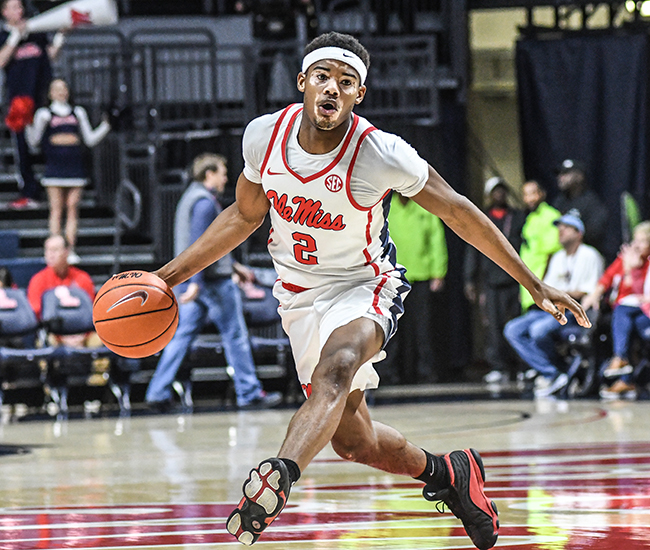 Ole Miss didn’t play their prettiest 40 minutes of basketball on Sunday in the Pavilion.

Regardless of a very slow start, they escaped a Sunday scare, defeating Tennessee Tech 80-63 in their final at-home, non-conference game of the season.

Playing their first game in eight days, the Rebels, at one point trailing 31-25 with four minutes to play in the opening frame, finished the first half on a 6-1 run but still trailed the Golden Eagles 32-31 going to half.

“It’s embarrassing,” said head coach Kermit Davis, talking about the team’s first half of play. “The ball movement, the body language. I think jump shooting affected us defensively. I think the last six or seven minutes we played a lot better defensively. … It’s college basketball. We’d all like to be up 20 at the half. We weren’t, but I tell you we’re being tested, and that’s a good thing.”

Ole Miss turned the ball over nine times and shot one of 12 from three-point line in that opening half. Of 353 Division I basketball programs, the Golden Eagles came into Sunday’s game ranked No. 313 nationally by the NET Rankings (Ole Miss is 52) and No. 332 by Kenpom efficiency rankings (Ole Miss is 79).

“I just think we were focusing on offense. We weren’t really playing defense or rebounding the ball,”  said junior guard Devontae Shuler.”We got going in the second half. KJ (Buffen) had at least eight rebounds. Blake (Hinson) had 10 rebounds. They just came out with more of a pop.”

Where the Rebels struggled early, they corrected themselves in the second half. Coming out of the gate to start the half, Ole Miss got hot. At one point, spanning over eight minutes, they put together a 23-6 run to firmly take control of the basketball game.

Ole Miss solved its turnover problems coming out of the half, committing only two after having nine in the first 20 minutes. Where they shot 8 percent from three in the first half, they shot 50 percent in the second half.

Devontae Shuler and KJ Buffen led Ole Miss in scoring for the afternoon with 20 points each, Shuler matching his season high. Buffen also added eight rebounds and shot 7 of 8 from the free throw line.

Shuler revealed after the game that he’s been dealing with a minor foot injury, which he suffered in a game earlier this month. He described the injury as a heel injury, and said he’s now around 80 percent.

“I couldn’t really move as much as I usually do or be aggressive on both ends of the court,” Shuler said. “I just feel like it’s held me back. A heel injury is kind of tough. It lasts a long time.”

With the win, the Rebels advance to 9-3 on the year. They do not return home to the Pavilion until Jan. 11, their SEC home opener against Arkansas. Next up for Ole Miss: a trip to Kansas to take on 11-1 Wichita State this coming Saturday.