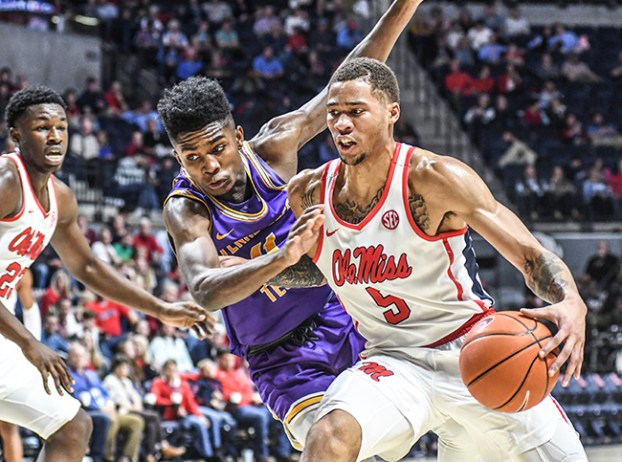 OXFORD, Miss – Devontae Shuler and KJ Buffen scored 20 points apiece and
led a decisive second half rally to lift Ole Miss to an 80-63 win over
Tennessee Tech on Sunday.

Shuler finished 8 of 12 from the field and added five rebounds and five
assists while Khadim Sy added 11 points. Ole Miss (9-3) shot 18 of 26 (69
percent) from the field in the second half and out rebounded the Golden
Eagles 37-30, including a game-high 10 rebounds by Blake Hinson.

Buffen had 16 second half points to highlight a decisive 23-6 run to build
an insurmountable 67-47 lead with 6:38 left. In the four-minute surge,
Shuler had two baskets, two rebounds, a blocked shot, an assist and forced
two Tennessee Tech turnovers that led to easy baskets.

Tennessee Tech: The Golden Eagles kept it interesting, leading early in
the second half before falling off the pace in the final 15 minutes.
Considering first-year coach John Pelphrey’s club had significant
contributions from eight sophomores and freshmen, the performance was
encouraging as conference play begins this week.

Ole Miss: The workmanlike win sets up a road game with Wichita State with
NCAA Tournament implications for both teams, as well as a January
Southeastern Conference slate that includes four road games. The Rebels
had 22 assists on 30 field goals, including five apiece from Austin
Crowley and Shuler.

Ole Miss visits Wichita State on Saturday while Tennessee Tech has an away game at Eastern Kentucky in the Ohio Valley Conference opener for both teams on Thursday.

Ole Miss didn’t play their prettiest 40 minutes of basketball on Sunday in the Pavilion. Regardless of a very slow... read more