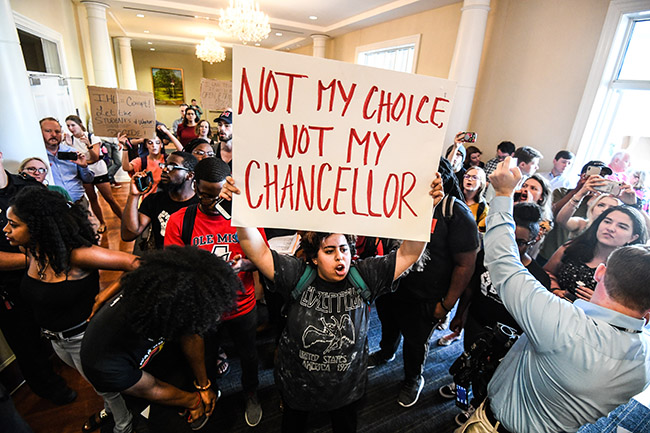 Protesters chant following the cancellation of the announcement of Glenn Boyce as the new chancellor of the University of Mississippi, in Oxford, Miss. on Friday, October 4, 2019. The announcement was cancelleded due to protests. (Bruce Newman, Oxford Eagle via AP)

Editor’s Note: This is the last installment of our four-part series, taking a look back at some of the most notable stories of 2019.

When it came to selecting the next chancellor at the University of Mississippi, the process could not have been more controversial than what transpired in early October.

Reports began leaking on Oct. 3 that the Institutions of Higher Learning had selected Dr. Glenn Boyce as the University’s next leader. Boyce, who was hired by the IHL to serve as a consultant for the search process, was not even considered as a candidate initially, and was not one of the eight names on a reported short list of candidates who were being interviewed.

Although claiming he did not “hire myself,” Boyce declined to say if he would return the consultation fee he was paid, which was around $87,000.

The following morning Boyce was scheduled to be introduced at The Inn at Ole Miss, but student protesters disrupted the announcement. Boyce’s hiring was later announced via a press release in an email sent out by the IHL. The ensuing week was filled with continued protests by campus groups and resolutions were passed, condemning the IHL and its process in which Boyce was selected.

King of the World

The month of October got off to a great start for Oxford’s own Sam Kendricks.

The former Oxford Charger and Ole Miss Rebel claimed his second straight IAAF world championship in pole vaulting on Oct. 1 during the IAAF event in Dohah, Qatar. With a clearance of 5.97 meters, Kendricks became just the second person in history to win back-to-back pole vault championships.

“A great competition is the sum of the effort, really,” Kendricks said afterward on TV. “It got messy. Miss. Make. Miss, miss, make. Somehow I went from first to second, and only by the merit of misses early in the competition was I able to make the clutch jump and take the win. 6.02 (meters) was in both our eyes, but because it was such a messy card, it was a hard bar to make.”

Claiming the 2019 world championship set Kendricks up for a big 2020, as he enters the year as the favorite to claim gold at the Summer Olympics in Tokyo in August. Kendricks won the bronze in his first Olympics during the 2016 summer games in Rio de Jinero, Brazil.

Joey East and Jeff Busby knew they had big shoes to fill when they put their names in the hat for the 2019 elections.

Running for sheriff, East was stepping into the office his father, F.D. “Buddy” East held from 1972 up to his sudden passing in September 2018. Running against Jeff South, East won with nearly 80 percent of the vote, continuing the tradition of an East serving as Lafayette County’s sheriff.

“It’s humbling. Very much so,” Busby said after winning the primary. “Jeff Busby didn’t do this by himself. It was my wife, family, friends that stayed beside me and led me and prayed for me through this whole ordeal. I’m humbled by the people of Lafayette County who have that much confidence in me. I’ve enjoyed my time as District 2 supervisor. … I look forward to continuing to serve in a different role.”

Brent Larson defeated Adam Clay to become Busby’s successor as the District 1 supervisor while Larry Gillespie narrowly defeated Josh McGlawn to become the new District 2 supervisor, replacing Kevin Frye. Frye did not seek re-election due to his bid to become Mississippi’s next District 9 senator; however, Frye lost the race to Nicole Akins Boyd.

With Joey East becoming the next sheriff of Lafayette County, the Oxford Police Department was in need of a new chief.

Since East stepped down in January, to spend more time on his campaign, Jeff McCutchen had served as the OPD’s interim chief. Once the general election was completed and East officially won the sheriff’s race, the City of Oxford went to work on naming his replacement.

The search did not go outside of the OPD building with Mayor Robyn Tannehill announcing McCutchen as the new permanent police chief on Nov. 26.

“Interim Chief McCutchen has basically had a 10-month job interview,” Tannehill said in a statement. “I am speaking for the Board when I say that we could not be more proud of how Interim Chief McCutchen has led the department and represented our community through some extremely tough situations. We have complete confidence in his ability to lead the Oxford Police Department into the future and continue to serve our community with wisdom and compassion.”

As interim chief, McCutchen oversaw several tragedies in the Lafayette-Oxford-University (LOU) Community and navigated the department through a year of change. The OPD became nationally accredited with McCutchen finishing the process that was started by East.

The decade closed out with Oxford ruling as the kings of Class 6A football.

Winning their first state championship in program history, the Chargers brought home the golden football after rallying to defeat Oak Grove in the MHSAA Class 6A state title game in Hattiesburg. The win capped a historic season for the Chargers, who also went undefeated in Region 1-6A to win their first region title in 6A.

Led by J.J. Pegues and John Meagher, the Chargers went through the gauntlet in the playoffs, defeating South Panola and preseason favorite Starkville to get to their first 6A state championship berth. They avenged their only loss of the regular season, defeating Starkville in the North Half title game.

No story was bigger regarding Ole Miss athletics in 2019 than the hiring of its new football coach.

Following the loss to Mississippi State in the Egg Bowl, Matt Luke was dismissed as the Rebels’ coach, leaving Keith Carter the task of finding a new coach before the early signing period.

The search did not last long, as Lane Kiffin was named Ole Miss’s sixth head coach since 2000 less than a week after Luke’s firing. Kiffin, who spent the last three seasons as the head coach at Florida Atlantic University, previously spent time as the offensive coordinator at Alabama and had head coaching stints at Tennessee and the University of Southern California.