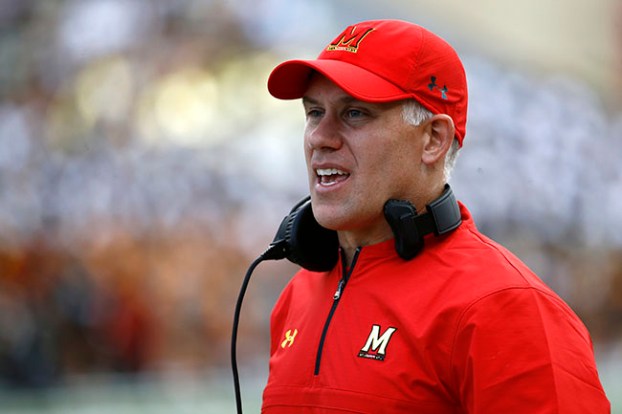 Former Maryland head coach DJ Durkin stands on the sideline during an NCAA college football game against Towson in College Park, Md. on Saturday, Sept. 9, 2017. Durkin, who was fired during the 2018 season following the death of a player who had collapsed during offseason conditioning drills, was hired Thursday, Jan. 2, 2020, as an assistant by Ole Miss. Durkin, who spent last season as a consultant with the Atlanta Falcons, will join new Ole Miss coach Lane Kiffin's defensive staff. (Patrick Semansky, AP)

Ole Miss announced Thursday morning the hiring of Durkin as an assistant coach under new head coach Lane Kiffin, presumably a hire for the defensive side of the football. However, there’s quite the backstory as to why it’s been so long since Durkin has held a full-time football job.

Durkin was fired from his head coaching position at the University of Maryland in October 2018 after being placed on administrative leave that August in the wake of an external investigation that found the culture at Maryland to be “toxic.” The investigation stemmed largely from the practice-related death of former player Jordan McNair, who passed after suffering heat stroke in practice and not being treated until it was too late.

An investigation determined that trainers at Maryland had failed to properly recognize the signs of a heat stroke during the summer practice, and once recognized, failed to take proper measures to get his body temperature back to safe levels.

A large portion of the blame, following the investigations, came down on strength and conditioning coach Rick Court. Court was said to have demeaned players, even force-feeding one player. He was throwing food in the direction of players, and there were reports that the training staff was supposedly pressuring players to come back from injuries early.

“Most of it was based on the actions of his strength and conditioning coach, Rick Court,” said Jeff Ermann, who covers Maryland for 247Sports. “There was a lot of talk after (McNair’s death) about how the training staff had become more ‘in-your-face’ and demanding after Durkin was hired, trying to live up to his reputation. He’s definitely one of those hardcore, robotic, super intense football coaches.”

Maryland officials placed Durkin on administrative leave amidst a long investigation. Durkin later won over Board of Regents and got them to believe he deserved a second chance, leading to his reinstatement in October.

Just one day later, amid public and player outcry, the Governor of Maryland, Larry Hogan, stepped in and urged the regents to reconsider their decision. Durkin was let go for good the following day.

“Some players said he was really good to them, but a lot said if you couldn’t help the team, they’d try to embarrass you and get you to quit.”

The investigation into events surrounding the day that led to McNair’s unfortunate passing, released to the public, contained many anonymous quotes from players at the University of Maryland. Like Ermann said, it goes both ways with the players. Some supported his firing, yet others defended Durkin, saying that the action of the trainers and conditioning staff doesn’t reflect directly on the head coach.

Below, are two such anonymous quotes from players at Maryland during Durkin’s tenure, one positive and one negative:

“It’s bull**** that Durkin is on paid administrative leave. … I don’t think Durkin should be paid and he should never get another coaching job. What he put us through is disgusting. I’m not happy with less than a firing.”

“He loves the game and loves our team. It’s not his fault the training staff didn’t take proper care. He would never have allowed that. He cares for us. He deserves to be back, was not in the wrong. Never threw food at anybody or used physical harm. Coach Durkin is innocent.”

Ole Miss is certainly taking a risk hiring Durkin. Yet, they believe it to be a positive one. The University – like with the hiring of Lane Kiffin, who brought his own question marks – after talking to people that have worked closely with the coach in the past, believe that Durkin provides a “positive impact.”

Regardless, it’s another big, risky decision for young athletic director Keith Carter, who released a statement Thursday morning regarding the hire.

“As part of our standard vetting process for all hires, the University conducted a thorough background check on Coach Durkin, and we connected with several highly respected college football coaches, administrators and school officials about their experiences working with him,” Carter said in a statement. “We received consistently strong feedback about Coach Durkin’s strong character and work ethic and his positive impact on the communities and institutions where he was previously employed. Once we had the chance to spend time with Coach Durkin, we were even more convinced that he is exactly the type of accomplished coach with strong football credentials who is also a proud and committed family man that will make him a great addition to our new staff.”

Durkin hasn’t been out of coaching entirely since his fallout at Maryland over a year ago. He spent the past season as a defensive consultant for the Atlanta Falcons. It’s also worth noting that, since the hiring of Durkin, who has defensive coordinator experience in his past, Mike MacIntyre is no longer listed on the Ole Miss football website as a staff member.