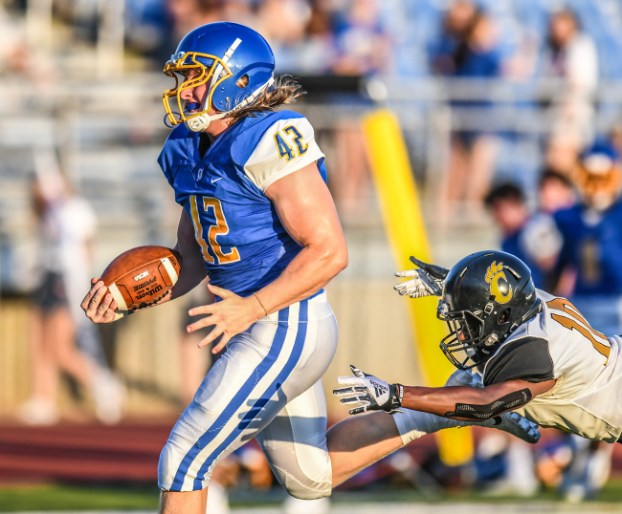 Getting into the United States Naval Academy, which has an acceptance rate of just nine percent, is a massive accomplishment in its own right.

Getting to play football at Navy is a whole different level of impressive. Doing so with a high school teammate? That’s simply very rare.

Clay Cromwell, a senior at Oxford High School, will be doing all three next year. Cromwell, who applied to the Naval Academy, got an unexpected call on Dec. 18, stating they wanted him to join the Academy as part of the football team. An incredible honor, it wasn’t something that was really on his radar.

“It was surprising. I had been talking to them, but it was more generic conversation,” Cromwell said. “Then kind of out of nowhere – it was early in the morning when they called – I got offered to play football there. It was really exciting.”

It’s not the most surprising of outcomes. Cromwell had been applying the the school, yes, but being part of the military is something that’s sort of always been in his life.

Clay’s father, Doug Cromwell, spent a large portion of his adult life serving in the Marines. He currently works with Oxford School District as a director of operations and taught ROTC classes with the district in the past.

“It’s something that I had always been interested in,” Cromwell said. “My father has always been a Marine. It was his career. I grew up all around the world living on military bases, so that’s had a big influence on me. … The tradition of the Naval Academy appealed to me. It’s an elite institution and it’s pretty hard to get into. Just getting in is a great accomplishment, and the people you’d be around, it makes you really improve as a person.”

Interestingly, Cromwell won’t be the only Charger senior going to Navy. OHS quarterback John Meagher committed to the Naval Academy back in June, also to play football for the Midshipmen.

With No. 23 Navy playing Kansas State in the Liberty Bowl this week, both Cromwell and Meagher have been able to go up to Memphis to see the team play and see how they practice.

“It’s crazy. Really, it’s pretty rare to have two people from the same school that are the same age playing at the Naval Academy. That’s very rare, so that’s special,” Cromwell said of playing more college football with his high school teammate Meagher. “Getting up there to Memphis and seeing how they do things, that precision and intention to detail and how they prepare is different.”

The Naval Academy is getting two Chargers, and two State Champions.

The holiday season seems to always speed everything up into hyperdrive, but for the high school sports schedule, it works... read more