“Serve With Love and Compassion”: Jeff McCutchen sworn in as Oxford’s chief of police 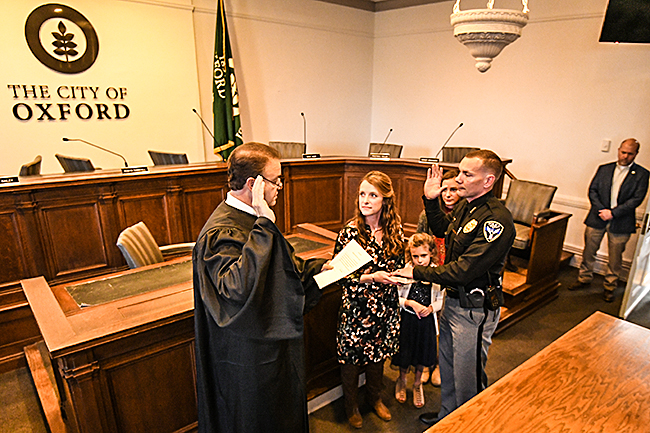 Jeff McCutchen served Oxford for 10 months as its interim chief of police, but on Monday, he officially took office.

During a ceremony held at City Hall, McCutchen was sworn in the Oxford police chief surrounded by family and friends.

Monday capped what has been a year full of professional upheaval for McCutchen, who this time last year was tasked with taking over a police department after Joey East decided to step away to focus on his bid to become Lafayette County’s next sheriff.

“I do speak for our entire (Board of Aldermen) when I say to you how proud we are of you. How you have handled probably the hardest year we’ve had, to record,” Mayor Robyn Tannehill said. “We have learned a lot in the past 10 or 11 months. We have learned that Jeff McCutchen is a man who makes decisions based upon prayer and lots of consideration. He is a man who deals professionally and fairly with everyone. … I am proud to have him serving on our team and our Board gives you our complete support.”

The months that followed McCutchen taking over the duties from East, he had to endure one of his officers being charged with capital murder in the death of one of the citizens he and the police department are sworn to protect.

The death of Dominique Clayton brought national and local scrutiny to the police department, including an investigation by Mississippi’s attorney general’s office, which has yet to be disclosed.

Two months later, the Oxford Police Department then helped in the investigation of the murder of Ole Miss student Ally Kostial, which once again brought national attention to Oxford.

“Even in the command staff role, you think you understand the stress of that job, but then you get in that seat and you have no idea,” McCutchen said. “If you can’t sit there and feel that pressure, you can’t describe it to anybody else. … That’s a hard pill to swallow sometimes, to think in that realm that everybody that you’ve got your eyes on, they expect you and your staff to be a cut above and to protect them. But also do it the right way to where they’re connected to you. That’s a big role.”

Now that McCutchen is officially in charge of the department, he has already begun thinking of how he intends to run it. He will take knowledge gained while serving on East’s staff, but McCutchen also said he intends to also restructure things where there are a series of captains that serve under him.

“I think you think of it sometimes how you would a sports team,” McCutchen said. “You’re going to have coordinators that have jobs, and we’re going to put the best people in those positions that understand our mindset, understand what we’re trying to accomplish.”

McCutchen said he intends to present his plans to the Board during their regular meeting on Tuesday.

Jeff McCutchen to swear in as new Oxford Police…