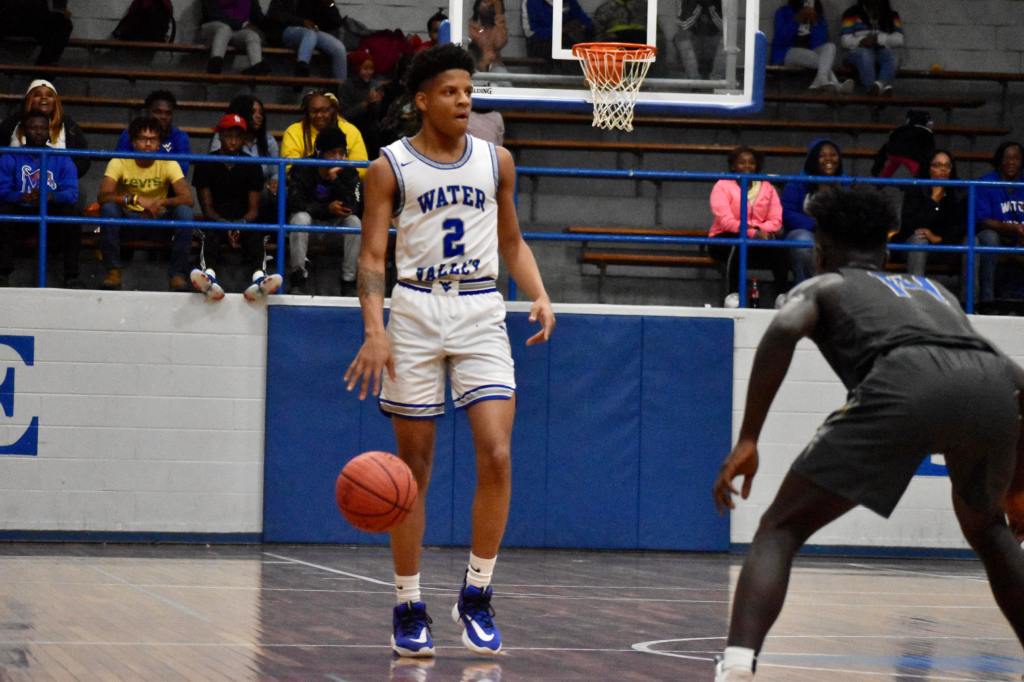 Water Valley point guard Jaylin Tolbert brings the ball up in a contest with Senatobia on Jan. 7, 2019 (Nathanael Gabler)

Water Valley got in a rhythm in the third quarter, yet fourth quarter woes and a bevy of late Senatobia free throws proved too much for the Blue Devils at home on Tuesday night, falling to Senatobia 50-45.

“We’re not where we need to be yet, but we’re making strides to get there,” said Water Valley head coach Jason Purdy. “We’ve been playing a little flat since Christmas break, and we picked it up a little bit tonight, but we just need to finish.”

Despite a first quarter that seemed to be controlled start to finish by the Blue Devils, they actually ended the opening eight minutes of play trailing 12-8. Water Valley’s opening frame was marred by the ability to get the ball down low at ease, but the inability to finish around the rim.

The second quarter featured more of the same for the Blue Devils, just with a different result. Where they failed to convert getting into the paint early, the second quarter saw them draw contact and get to the free throw line five times. For Senatobia, the first half runs for Water Valley were buffed by Senatobia’s ability to knock down the three ball, hitting on handful of long balls, including one at the halftime buzzer, to take a 24-20 lead to half.

Water Valley came out in the second half with a different zone look, one that temporarily stifled Senatobia. The Blue Devils took the advantage to quickly grab their first lead since early in the game at 28-27 midway through the third frame. After three quarters, they lead 33-31.

A Senatobia three pointer with about five minutes to play gave them the lead back, sparking a 9-2 run. The Blue Devils fought back, tying the game at 39. However, the Warriors simply got really hot down the stretch. Senatobia eight of nine free throws to end the game while Water Valley failed to score the basketball.

“We’ve been stressing scoring. It’s been a struggle,” Purdy said. “We have a few guys that need to step up and contribute more offensively. Tonight, it was free throws that killed us… and that’s why we’ve struggled with scoring, finishing. Then we struggled finishing the game as well.”

On the women’s side, it was a bit more of a grind on Tuesday night for Water Valley.

The Blue Devils lost 68-12 to a very good Senatobia team that has lost just three games all year, all to schools at divisions higher than 3A.

Water Valley started off really well in the game, getting up to an early 7-5 lead. They simply couldn’t keep up with the more experienced and talented Warrior team.

Near the midway point, the season has been a struggle for the Lady Blue Devil team, but there’s some reason to believe in this team: their youth. Water Valley is fielding a team laden with sophomores, with just one senior and two juniors. They’re still growing.