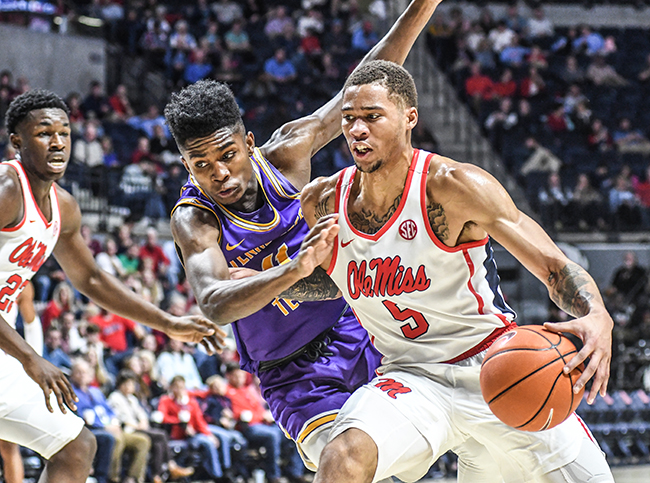 A struggling Texas A&M (6-6) team awaits, but the Rebels aren’t exactly entering SEC play on a hot streak themselves.

At 9-4 entering the start of conference play, things don’t seem all that bad for the Rebels on the surface. They have a good win on the books (vs. No. 20 Penn State) and they haven’t lost a “bad” game. All the Rebel losses come to Quadrant One teams, like Memphis, Oklahoma State, Butler and Wichita State.

Just watching the Rebels, they don’t look like nearly the team that made the NCAA Tournament a year ago after going 10-8 in conference play. Yes, Ole Miss has just four losses to four good teams, but they got absolutely throttled in three of the four.

In the three losses since the Memphis game early in the season, Ole Miss has lost by an average margin of defeat of 23 points and have scored just 49.6 points in each. Against good teams, Ole Miss has simply had serious trouble scoring points.

Thirteen games is a good enough sample size to look at some of these offensive numbers. For a Rebels team with many young faces, they were going to need to rely on their All-SEC backcourt of senior Breein Tyree and junior Devontae Shuler to lead the team offensively. The problem is that, after both taking a leap forward last year, they’ve regressed so far this season.

Through the non-conference schedule, Tyree is shooting just 39 percent from the floor and 32 percent from three-point range. Last year, those two numbers were 46 percent and 39 percent. Ole Miss lost a key figure from last year in Terence Davis, who is now playing in the NBA for the Toronto Raptors, who often last year took a good bit of the defensive focus, allowing Tyree to thrive.

This year, it was expected that Tyree would step up again, allowing Shuler to thrive while defenses keyed on him. The issue isn’t just that Tyree is struggling to score; Shuler also has yet to step up – his shooting numbers are also down three to four percent from a year ago.

Foul trouble has been another issue that’s really hurt the Rebels. This past weekend, in a 74-54 loss at No. 24 Wichita State, Ole Miss starting forward KJ Buffen played just 20 minutes before fouling out of the game. It was a serious problem with Buffen in his freshman season a year ago, when he averaged 4.8 fouls per 40 minutes. He’s cut down on the fouls this year, to 3.8 over 40 minutes, but has still fouled out three times, including two of the three games against ranked teams.

Like the issue with Tyree’s scoring, Buffen’s foul issue helps show other issues: the deeper Ole Miss has to go into their bench, the more they struggle. There’s a lot of promise and talent with the young freshmen on the Rebel team, but that promise is yet to show in consistent production.

Entering conference play, the Rebel bench is scoring 21.1 points a game. That number isn’t bad on the surface, until you consider that includes 5.8 points per game from Luis Rodriguez who hasn’t played since Nov. 23 and is still in a boot dealing with a foot injury. Against Wichita State this weekend, Ole Miss played guys off the bench for 65 minutes and got just 10 points total out of those five bench players.

It’s not all bad for the Rebels. As mentioned, they’ve played a tough non-conference schedule. Ole Miss is one of just two SEC teams, along with Georgia, to play four non-conference Quadrant One games. The Rebels rank No. 68 in the NET Rankings, certainly putting themselves in striking distance as SEC play opens, and have lost just one home game.

Historically, the team will need to match its 10-8 record in conference play to have any shot at an NCAA Tournament bid. That all starts Tuesday in a trip to play a very beatable 6-6 Texas A&M team that ranks No. 181 in the NET Rankings. Ole Miss certainly has some areas they need to work on if they’re going to compete and win in the SEC, but they couldn’t really ask for a better opening matchup to get back on track.

Ole Miss women blown out on road at No.…