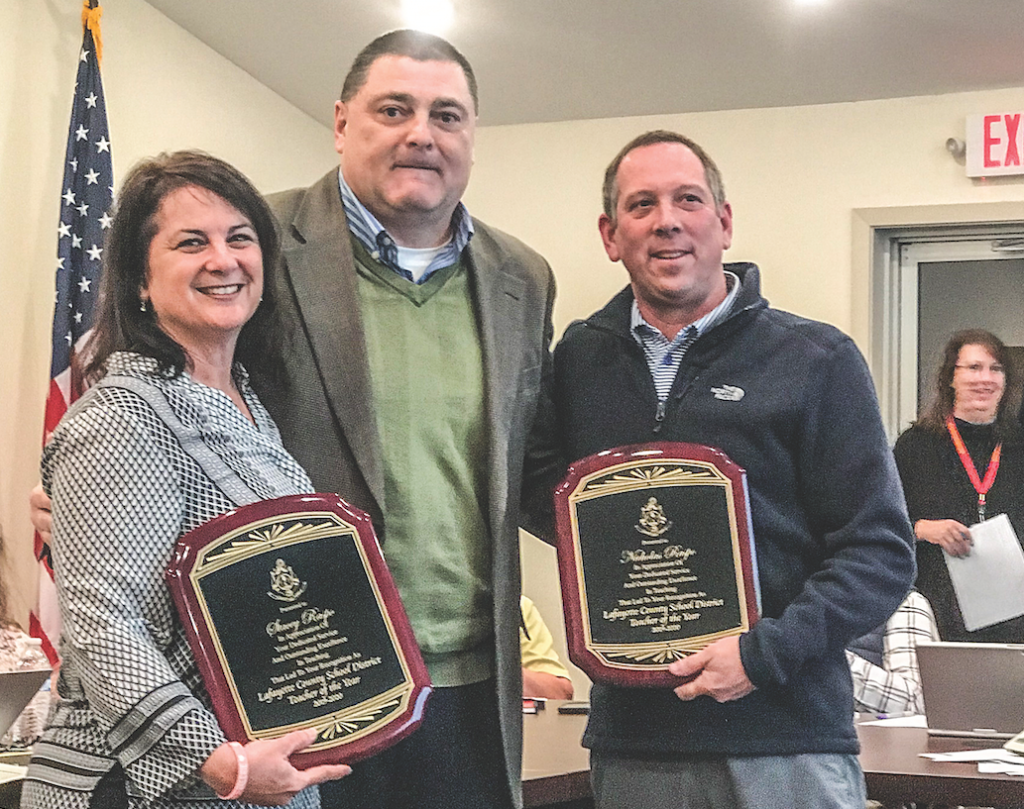 Stacey Raspo, left, and Nick Raspo, right, were named the co-Teachers of the Year in the Lafayette County School District. School superintendent Dr. Adam Pugh, center, presented them with their awards during Monday's school board meeting. (Jake Thompson).

Lafayette County School District could not decide on just one Teacher of the Year and instead of causing a family squabble, they chose to go with two.

Husband-and-wife duo Nick and Stacey Raspo were named the school district’s co-Teachers of the Year for 2019-2020 by school superintended Dr. Adam Pugh during the school board’s January meeting on Monday. The couple was selected out of a list of finalists comprised of Teachers of the Year from each Lafayette school. Nick, who teaches fifth grade math and science, was Lafayette Upper Elementary’s Teacher of the Year and his wife Stacey, who teaches family consumer science, was named Teacher of the Year at Lafayette High School.

Moving from Modesto, Calif. in the summer of 2017, the Raspos had to quickly get acquainted to life in Mississippi. The move was, in part, an effort to be closer to their children. Their son, Andrew, is a senior on the Ole Miss track team and their daughter, Emily, was a member of the softball team before opting to focus on her studies as an accounting major after her freshman year in 2015.

“About three-and-a-half years ago (my daughter) said, ‘I love the South, I’m not coming home.’ We had been here so many times we got it and we understood,” Stacey said. “(My husband) looked at me and said, ‘Let’s go. They’re going to need teachers in Mississippi, right?’ So, here we are. … I feel like since we’ve been here it’s been part of a family; that we haven’t been, say, new. It’s like we’ve been welcomed. I was honored. I was humbled.”

The Administrator of the Year was Lafayette Elementary School Principal Paula Gibbs.

“We’ve got a great group of teachers and I’m very pleased with what we have,” Pugh said. “Those are just five examples of just outstanding teachers that we have in the district. … Those two are just two examples of people who come in and the outstanding impact that they have just on the buildings that they’re in. I can’t say it enough just how fortunate we are in the people that we have and the impact they have on young people and just how much they care.”

The Raspos will now move on to see if they can become the third-consecutive teachers from Lafayette County to be named the top teachers in Mississippi. Hannah Gadd Ardrey took home the title of the state’s top educator in 2019, as did Whitney Drewrey in 2018.