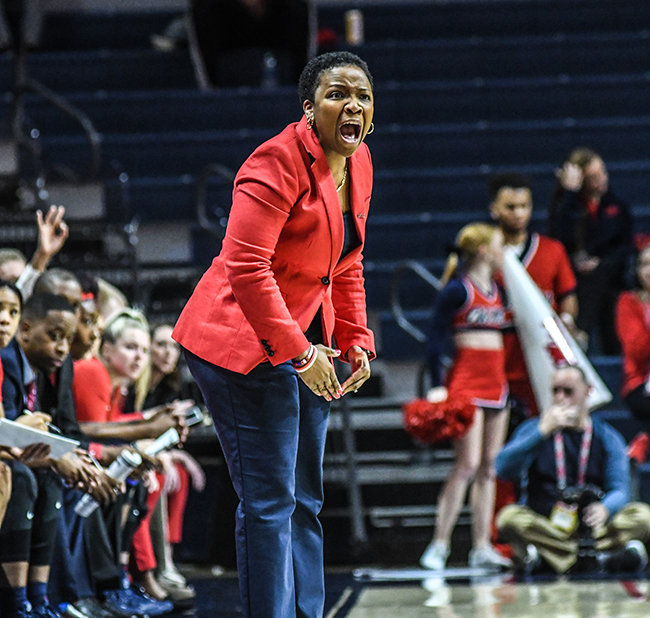 Mississippi head coach Yolett McPhee-McCuin reacts during the game against Tennessee at the Pavilion at Ole Miss, in Oxford, Miss. on Thursday, January 9, 2020. It was announced on Thursday that Ole Miss will host Kansas this season as part of the 2020 SEC/Big 12 Challenge. (Bruce Newman, Oxford Eagle via AP)

No. 23 Tennessee led wire-to-wire as the Ole Miss women’s basketball team fell to the Lady Vols, 84-28, at The Pavilion on Thursday night.

Ole Miss (7-9, 0-3 SEC) could do little to slow down one of the NCAA’s all-around best squads, as Tennessee (12-3, 2-1 SEC) shot 49.3 percent from the field, 92.3 percent from the free throw line and improved on its NCAA-leading season rebounding margin by a wide berth.

“We’ve just gotta get through this, there’s no excuse,” said Ole Miss head coach Yolett McPhee-McCuin. “Tennessee is a great team. They were just so big, I think our players were just shocked. It was as if they couldn’t get anything, and that’s just how these top-25 teams are going to look. I think they’re the tallest team in the country, and so they bothered us. Every time we had a beat, they caught up on us and they were able to deter our shots.”

The Rebels received two solid performances out of junior Dominique Banks (12 points, seven rebounds, three blocks) and freshman Jayla Alexander (nine points). For Banks, this was the ninth game this season with at least three rejections. She has yet to go a game this year without at least one block.

Ole Miss will have a quick turnaround against another strong team, traveling to LSU (12-3, 2-1 SEC) on Sunday.

“We’re in the storm, and we’ve got to go through it,” McPhee-McCuin said. “We can’t go around it. At the end of the day no one is going to feel sorry for us, and I don’t expect them to. This is the most physical, unforgiving conference in the country.”