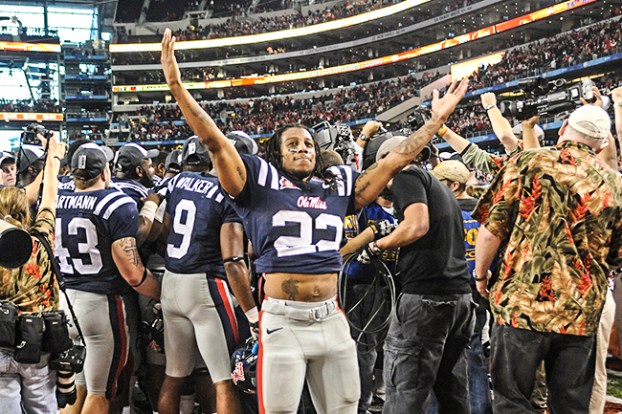 ARLINGTON, Texas – Former Ole Miss standout Dexter McCluster is one of seven individuals to be inducted into the Cotton Bowl Hall of Fame during enshrinement ceremonies later this year in the spring, at AT&T Stadium.

McCluster will be the third Rebel to be inducted into the hall of fame. Quarterback Eagle Day was inducted in 2003, while former coach Houston Nutt was enshrined in 2018.

McCluster became just the second offensive player ever to earn back-to-back Cotton Bowl MVP honors in 2009 and 2010, sharing the feat with the legendary Doak Walker. In 2009, the last Classic played in Cotton Bowl Stadium, McCluster fueled a 47-34 victory over Texas Tech with 180 all-purpose yards.

He proved to be even more elusive a year later as Ole Miss christened AT&T Stadium with a 21-7 defeat of Oklahoma State. His 86-yard dash started the scoring for the Rebels’ in their second straight win in the Cotton Bowl.

In his two Cotton Bowl appearances, McCluster ran for a combined 281 yards and three touchdowns. The speedster also hauled in 11 catches for 128 yards.

McCluster, a four-year letterwinner for the Rebels, finished No. 2 on the Ole Miss career all-purpose yardage list with 4,089, behind only Deuce McAllister’s 4,889. He ranks ninth among the all-time Rebel rushers with 1,955 yards.

The Largo, Florida, native earned third team All-America honors in 2009 after rushing for 1,169 yards, the second-highest rushing total in school history, and eight touchdowns as a senior. McCluster, who received the National Running Back Trophy from the College Football Performance Awards, became the first player in SEC history with 1,000 rushing yards and 500 receiving yards in the same season.

McCluster would go on to be drafted in the second round of the 2010 NFL Draft by the Kansas City Chiefs. After four seasons in Kansas City, he spent two years with the Tennessee Titans and then the 2016 season with the San Diego Chargers

The induction ceremony for The Class of 2020 will be held on the west concourse of AT&T Stadium in Arlington next spring. The exact date is still to be finalized. The hour-long ceremony is free and open to the public.

The Chargers and Commodores ordered up goals by the dozen on Thursday night in district games. The Lafayette girls (13-4-1,... read more