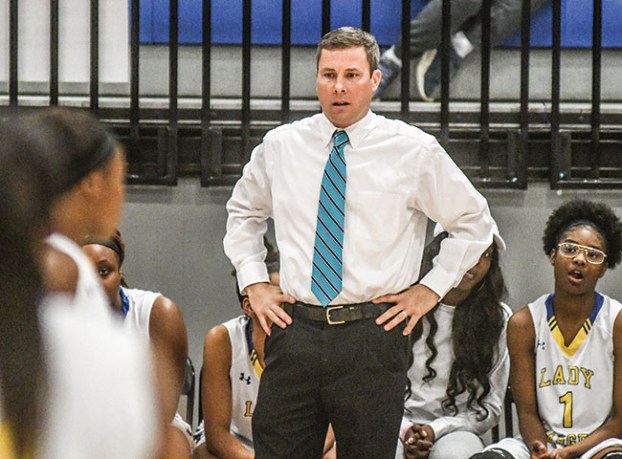 Having lost four in a row, including their region opener, the Oxford girls needed a boost. They were admittedly down and needed a shot in the arm to turn their season around.

Tied entering the fourth quarter Friday night against region foe Southaven, they found that late spark to pull away and win 51-47.

“We always talk about the next game being the most important. But coming off the way we came off Christmas break and the start of division play, we needed that win,” said head coach Cliff Ormon. “It was a really good team win for us. We kind of had to gut it out at the end, but we needed that. The players, the coaches, we all needed that win.”

They started off like they got that shot, scoring 12 of the first 16 points of the game. Then Oxford freshman Audria Houston, having scored eight of the game’s opening ten points, went cold and so did the Oxford offense. Southaven battled back, going on a 10-2 run of their own to lead after one quarter. Scoring slowed in the second quarter on both sides, the Lady Chargers able to outpace Southaven to retake the lead 24-22 as the game went to halftime.

“She has the potential to be a really good player,” Orman said of Houston. “She’s really quick in the open court. We were able to get it to her in transition and get going. A lot of things went into that but she’s growing every game.”

With Caliya Toles controlling the paint on the defensive end – she blocked 6 shots on the night – the third quarter scoring was just like the second. Teams missed a lot of shots close to the basket and the game went to the final frame tied at 34.

Just like the snapping of fingers, Oxford’s offense shifted as the quarters did. The Chargers started the final frame by scoring the first three baskets, one of two separate 6-0 and 8-3 runs in the quarter. Audria Houston, hot in the first quarter, heated up again down the stretch, scoring six points in the fourth quarter to cap her 18 point outing. Oxford, allowing a little Southaven run of their own late, would hang on to win 51-47.

“They made a lot of hustle plays that kept them into it. We had to play eight minutes of really tough basketball down the stretch to win the game,” Ormon said. “We needed to believe and we needed to see this happen to believe we can get it done in the clutch moment. I’m proud of this team we really need ed this win.”

Kylan Blackmon hits game winner as Oxford boys hang on for win No. 14

If one were to watch the opening five minutes of play on Friday night between Oxford and Southaven, they would be shocked to see the final score.

Oxford, having opened the game on a 20-3 run, got lazy and let their Region 2-6A foe all the way back in the game. A tie game at halftime, Oxford would need last-second heroics to pull out a 79-77 win.

“We had spurts where we played really undisciplined defense,” said head coach Drew Tyler. “Southaven was rallying and playing off emotions. We gave way too many open lanes to the goal and let them back in. But I really focus on us losing an 11-point lead with two minutes to go.”

Getting out and running, Oxford scored 20 points in a flash to start the game. Southaven seemed like they didn’t know what hit them and the home team looked like they’d run away with a shot to score triple digits. They let their foot off the gas.

Southaven was hardly at full strength when they took the trip to Oxford on Friday. Just this week, they had kicked one starter off the team and suspended another. A third starter was hurt and didn’t play. Regardless, they were able to stick around, putting together some big runs of their own.

“We got complacent and didn’t show our offensive firepower,” Tyler said. “We have the ability to score in bunches and didn’t show that for the whole four quarters tonight.”

The visiting team went on a 19-4 run following the Oxford opening, eventually tying the game at 35 going into the half. Coming out of the break, the game was more balanced than it had been all night. Oxford held a slight lead after entering the fourth quarter, where they exploded again.

Oxford scored eight of the first ten points of the fourth quarter, yet again using a long run to expand their lead to eleven. Southaven crawled back, pulling the game to 75-73 with 2:20 to play after a pair of intentional foul free throws and subsequent basket, tying the game at 75 with 1:11 to play just one possession later.

With the game tied at 77, and the game on the line, Oxford turned to the player that’s been there for them all year. Oxford senior Kylan Blackmon took the ball to the left baseline, rising up over a Southaven defender to ice the game. Oxford wins 79-77.

“I just know my team was counting on me to get the go-ahead bucket. I just did what I had to do,” Blackmon said. “On any given night, anyone can be off and we have other guys ready to step up. Our seniors are a big part of this team and JJ was great tonight.”

While Blackmon finished with 28 and hit the game winner, fellow senior JJ Pegues was even more electric in this one. The tight end recruit heading to Auburn to play football showed he’s more than just a big body – he might have the best shooting touch on the team. Scoring 37 points, Pegues shot 4 for 6 from long range in the win.

Both the girls and boys return to action on Tuesday at Lafayette.

The Chargers and Commodores ordered up goals by the dozen on Thursday night in district games. The Lafayette girls (13-4-1,... read more