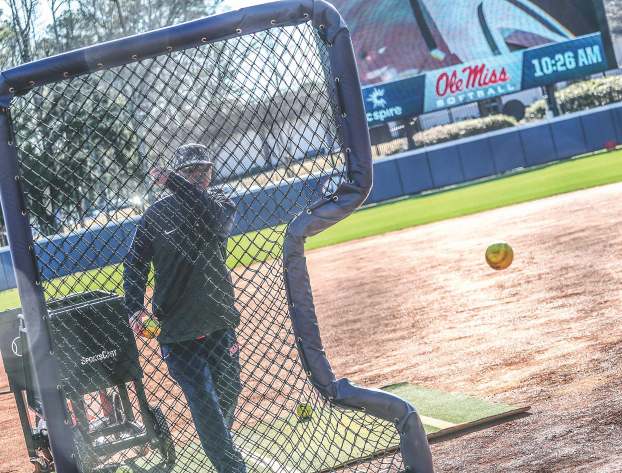 Ole Miss softball opened practice on Tuesday with a much different look, yet the vibe was consistent.

For the first time since 2015, Mike Smith will not be leading the Rebels as they enter the 2020 season. Smith resigned in December, after being placed on administrative leave following what was described as a “non-financial, external audit” of the softball program.

Now at the helm is former associate head coach, Ruben Felix, who will make his Ole Miss coaching debut in February.

“I’m not going to fix what’s really not broken,” Felix described following the official opening of the team’s winter practices on Tuesday. “We’ve built this team around speed, pitching and defense. We’re going to go with that and see where it takes us. It’s been successful for us for five seasons. Hopefully it continues.”

Felix, 49, played professional baseball for five seasons in the United States and Mexico before starting his coaching career. He coached five years in Major League Baseball as an assistant for the Baltimore Orioles and Cleveland Indians before eventually breaking into the softball ranks as an assistant at the University of Central Florida.

“Being prepared, we’ve always been prepared. Obviously, change isn’t always easy for everybody, especially for young athletes,” Felix said. “But I think they’re mature enough to understand that we still have a job to do. We’re still here to do that job. We’re here now, so we have to pick up those pieces and move forward.”

Talking to girls on the team, those broken puzzle pieces seem to have mended themselves both quickly and naturally. Smith’s resignation came right during finals, shortly before the team would go their own separate ways for the winter break.

The girls never really had a chance to meet and talk about everything that transpired rather suddenly. Instead, many came back to campus earlier this week and resumed normal duties as practice opened.

Certainly, it’s been a lot of turmoil in a short time, but the team insists it hasn’t impacted their tight-knit group.

“We’re excited. Coach Felix is a great coach and he’s been with us since the beginning. He’s been with us since my freshman year, obviously,” junior Jessica Puk said. “We’re just going to maintain the same family environment. He’s been a great mentor for all of us. He’s a great role model. We’re just going to continue building that family atmosphere.”

From a logistical, coaching perspective, the first thing Felix did when he began settling in as the interim head coach was to get the team’s prospective future players on the phone.

The team had 13 commits lined up to come to Oxford over the 2020 and 2021 recruiting cycles. With a head coach resignation, and Felix still retaining the interim tag, it would be reasonable for a few of those players to re-open recruitment, taking a new look at their other options.

According to Felix, all 13 commits are definitely still fully committed to the Rebels.

Ole Miss returns many of the key pieces from the team that went 41-20 a year ago, their season ending in a Super Regional in Tucson, Ariz. Two critical fixtures, in center fielder Kylan Becker and pitcher Brittany Finney, will need to be replaced. Yet the staff and team is still confident that this could be the year they go to the Women’s College World Series for the first time in program history.

“The softball is going to take care of itself, because we’re talented. But the quicker we turn the page and look forward and be positive with each other, I think the sky is the limit with this program,” Felix said. “As far as number of wins and losses, I expect us to just have a good season and hopefully compete in the SEC. I think the SEC this year is going to have a lot of parity, other than Alabama. Their pitching is front-line, for sure. I think everyone else will have a shot at beating each other up in the SEC.”

With practice opening this week, the team has just under one month until their season opens Feb. 6 against Louisville.

Meet the Rebel softball team Saturday at the Pavilion

Ole Miss softball will hold its annual Meet the Rebels event on Saturday at the Pavilion prior to the men’s... read more