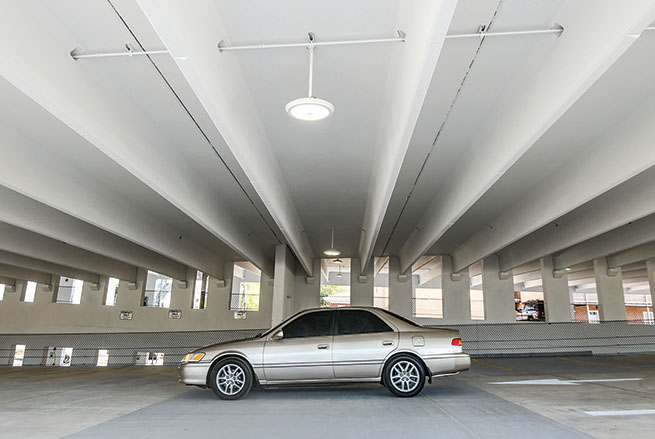 A driver leaves the new parking garage, which opened in Oxford, Miss. on Friday, September 27, 2019. This year's Double Decker Arts Festival will be the first to have the parking garage as an option for attendees. (Bruce Newman, Oxford Eagle)

For the first time in its 25-year existence, the Double Decker Arts Festival has a new option for attendees to park.

The downtown parking garage opened last August, and will provide nearly double the parking spots that have previously been available during the annual April event. With that, the garage became a key focus during the Oxford’s Downtown Parking Commission meeting on Friday.

Festival coordinator Leigh Ann Stubbs spoke to the commissioners about Visit Oxford’s plans for parking during the festival and for the new parking garage. Most of the lots and spaces that have been available the previous 24 years will still be available for art vendors, sponsors and attendees.

When it came to the parking garage, Stubbs proposed they charge $20 per vehicle, per entry from 10 a.m. to 9 p.m. If a vehicle leaves the garage and returns later in the day, it would be charged $20 again.

Saturday’s portion of the two-day festival runs from 10 a.m. to 10 p.m. Parking commissioner Kevin Frye questioned if whether the garage should open earlier on Saturday to allow for more traffic flow and the opportunity to make more revenue. A time of 8 a.m. to 9 p.m. was then proposed.

There was also the sticking point with commissioners regarding how the money made from people using the parking garage would be divided up between Visit Oxford and the City in recouping as much money back as possible on festival expenses and the revenue pot to help pay back the bond on the garage.

“We need the money,” said Mark Levy, who works with the city. “This is one of the things that when we built the garage we wanted to, we need a boost in the revenue and we kind of relied on (Double Decker) all the way along. I don’t know how the numbers would work out, but I think we could figure it out to where (Visit Oxford) could get what you got last year, plus some.”

The idea was also presented to raise the cost to $25, which is what the City had previously discussed charging for Ole Miss game days with Southeastern Conference opponents.

A decision was not made regarding the parking garage, but the commissioners voted to create a sub-committee to look into the matter further and work toward a resolution to present to the Board of Aldermen.

Stubbs did note what they call the “south lot” behind City Grocery will still be used for art vendor parking as well as an exterior parking bay next to the parking garage. Those lots would be closed starting at 6 a.m. on Saturday and then reopen to the public at 10 a.m., when the arts festival begins.

Specifics were not given, but Stubbs did say they have plans to use the plaza space just south of the parking garage as an addition to this year’s festival.