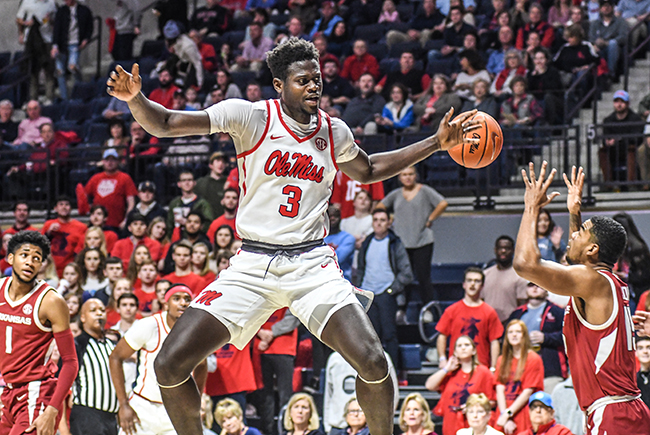 The Rebels are in a valley. Saturday against Arkansas, in the team’s first SEC game of 2020 in The Pavilion, Ole Miss showed signs of competency. They simply weren’t able to finish against a very good Arkansas team, losing their third straight by a score of 76-72.

At points, the team that took the court Saturday resemebeled a much better offensive team than the one that had lost their prior two games to Wichita State and Texas A&M by scoring just 54 and 47 points. But in the end, it really didn’t matter.

“There’s absolutely zero moral victories,” said head coach Kermit Davis. “Did our team improve? Yup, in spots. But we all expected to win in that locker room. There was no doubt in our minds we were going to win the game.”

Ole Miss has been struggling offensively. Yet again, they came out of the gates Saturday against Arkansas in their SEC home opener struggling offensively. However, at some point midway through the first half, the Rebel team flipped a switch. It took Ole Miss nearly six minutes to make a shot from the field on Saturday. In the opening ten minutes of play, the Rebels scored just eight points. But Ole Miss put it together.

Breein Tyree hit a three-point jump shot with 9:59 on the clock in the first half, sparking three-straight buckets for the senior who’s lead Ole Miss in scoring in over half of the team’s games this season. Starting with that first three pointer, the Rebels scored 25 points over the final ten minutes of play in the first half, closing the frame on a 20-7 run to take a 33-27 lead into halftime.

“We’ve been having a hard time scoring around the goal,” Davis said. “So we went to a smaller lineup. We played K.J. (Buffen) and Blake (Hinson) together at the same time. I thought it made us a better offensive team and gave us a little more mobility.”

The second half was played much more balanced than the first. Ole Miss built their lead up to as many as 11 points before Arkansas went on their run. A 9-2 Razorback run tied the game with 5:33 to play, where it would go back and forth for the remaining minutes. Arkansas, with 2:33 to play, would take their first lead since there was 4:07 remaining in the first half. They never relented it, hitting the clutch free throws late when it mattered to seal the 76-72 win.

“I thought we played well for about 35 minutes of the game,” Davis said. “But we’re having trouble stopping (individual players). We just did a poor job at the end of getting after (Isaiah) Joe.”

Joe, Arkansas’s sophomore guard, scored 34 in the game. Twenty-six of his points came in the second half.

There were positives in the loss. Simply put, Ole Miss came into the night struggling significantly on the offensive end. They entered play Saturday coming off back-to-back games where they scored just 54 and 47 points, both losses. The Rebels shot 30.4-percent in those two games. On Saturday, Ole Miss scored 72 and shot over 40-percent. Yet they still struggled from distance, hitting on just 3 of 13 three-point attempts.

Now 9-6 (0-2 in SEC play), Ole Miss doesn’t return to The Pavilion again until next Saturday, a 7 p.m. game against LSU. They play Florida on Tuesday night at 6 p.m., televised on ESPN2.